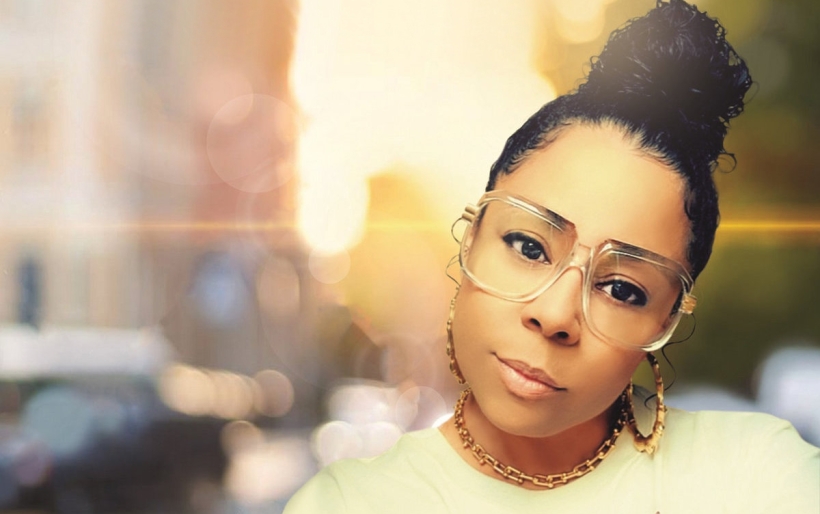 Shortie No Mass | photo courtesy of the artist

Back Like She Never Left: ‘Here Goes Nothing’ with Shortie No Mass

In 1993 the world got its first taste of Terressa Thompson, aka Shortie No Mass. She was featured on both De La Soul’s Buhloone Mindstate and The Roots’ first album Organix, where she took part in the longest posse cut in history — “The Session.” Terressa moved to Philly from Boston when she was 11, and after a few years did she find herself embracing the historic hip hop scene in Philly. But not long after landing on the scene, she stepped back from the spotlight.

We were lucky enough the get to speak with her about her history, her amazing start in the game, why she stepped away, and her long-overdue debut album Here Goes Nothing.

The Key: When did you first start rapping?

Shortie No Mass: At age 14 in ninth grade, I had friends who did; boys of course, because I was a Tomboy. We used to go to Mel “Chaos” Lewis’ house, he was young like me. His mom’s house had no furniture in the living room, just his turntables and he’d play breakbeats and we’d just rhyme. And that was it, I was a rapper, hahaha.

TK: Who were your early influences?

SNM: I was like 14, 15 making little records with Mel, and my sister was taking violin lessons, so we had to go to this store to rent her a violin and Leonard Hubbard (RIP) worked there. My mother was saying “oh my daughter raps” and Hub said “well, my friend Rich [Nichols, former manager of The Roots, RIP] is having a contest and the winner gets free studio time. So I submitted a tape and I won. So Rich started managing me then, this was even before he was managing The Roots.

TK: So Rich Nichols kind of got the ball rolling?

SNM: Yeah, he was managing my career, getting me talent shows, getting us backstage, things like that. One of the shows was a De La Soul concert and Rich knew a publicist who knew Posdonus from De La. He took a liking to me and I started doing stuff with them. Rich stayed here when I went to work with De La Soul in New York, and while I was gone he started working with The Roots. So it all kind of happened at the same time. So while I was finishing up my stuff on Buhloone Mindstate, I came home for a day and went right to the studio to record the song “The Session” with The Roots for Organix.

The crazy part is that same week I had the option to go to Japan with De La Soul or Germany and the Netherlands with The Roots. I choose to go with The Roots because I figured hip hop is bigger in Japan, so I’d get the chance to go there again. I didn’t, hahaha. But yeah I went with them to Germany and the Netherlands to do a couple of festivals. When I got home though, I was right back in New York with De La.

TK: That must have been crazy at such a young age to be around these great emcees?

SNM: Oh, it was, I was around 16 when I first met Pos, and the first time I really hung out with him we were at his house, and Phife from A Tribe Called Quest is there. Then we went to a Black Sheep concert that night. I remember thinking “I’m 16, I really shouldn’t be here, hahaha.” But, I was playing it cool, I couldn’t show that this seemed so big. I also feel like it was kind of a test to see if I’m gonna be overwhelmed by it all. Am I gonna be someone you can’t or don’t want to bring around other people. So I definitely had to play it cool.

TK: What was something you learned being around such talented emcees while you were coming into your own?

SNM: More than anything it was experience. Not to be so critical of my own work — like I hated “In The Woods” when I wrote it. I felt terrible, this was coming out to the world and I hated it. But they loved it and then to go on tour and hear people recite my word back to me it felt good. Know I love it but then not at all. So it taught me that I really wasn’t the best person to critique myself. I even say that on this new album. Also the experience of seeing what it takes to make an album. So it wasn’t really learning from someone in particular but the experience overall.

TK: Yeah, making an album is a completely different experience and getting that exposure must have been huge?

SNM: Yes. I could write a rhyme, but making a song, writing hooks things like that were huge to learn. I could get in my own head about it, but that album was the first time I wrote hooks and choruses because I was able to get out of my own head. That’s why I say on the new album “My worst is better than their best” because I’ve really reached a stage in my life that I just don’t give a fuck.

TK: So, was that kind of the mind state going into making Here Goes Nothing?

SNM: Yes, absolutely. I never planned on making an album, it had been so long. I always say I did this for the fans. They kept asking when I would drop something. We dropped the singles “Like This” and “U like My Style” in like 95 and then later the video on YouTube had like 2 million views for like 10 years and then in the last 3, it got to just under 10 million views. There were so many people who were like 17, 18, 21, asking was I doing more. So there was this whole different fanbase that was discovering me. My label made it really easy for me, they re-released the single and it sold out. So they were like you should make more, we’ll pay for it. So it was a pretty easy decision. Also my son, he had gotten into making beats and they were dope. So he was a big part because this would let him get his foot in the door as well. And be an established published producer.

TK: The album features some heavyweights when it comes to production like J-Zone, Rockwilder, Da Beatminers, and then of course your son Jay Law. Does he have an interest in continuing to make music?

SNM: Yes, he’s more into Dance and EDM music, but he likes hip hop. In fact he just gave me a beat about that I was like man I wish you gave me this for Here Goes Nothing, hahaha. But yes, being able to see the process with some of the best was great, and he definitely wants to keep doing it.

TK: Was it just different label issues that caused us to have to wait so long to get an album?

SNM: Well early on, I was just so young and I was just doing what they told me to, being where they said to be. When I was on tour with De La, I landed a deal with Def Jam, but it didn’t end up working out. When I got back to Philly I was still around the music — in fact I was living in a house with Questlove and the Jazzyfatnastees, but I just wasn’t really doing music. I didn’t really have management at that point. There were a ton of labels that had interest, even the legendary Dante Ross recently tweeted “Why didn’t I sign Shortie No Mass. It would have made sense.” But I spoke with him, I said it’s because you couldn’t contact me. You know this is a time before cell phones and social media. So all that played a big part.

TK: When I listen to Here Goes Nothing, it feels very vibrant and bright. The way I’ve described it is it felt like sunshine. Was that the approach with it, to be an album that feels good?

SNM: Well, part of the album was written in 2007. I was supposed to do a deal with this label in Japan, but it didn’t work out. But I felt really good about that stuff, but over time I forgot about it. So when my label wanted to do this album, my original thought well, I’ll do an EP. But as I was lookin through old stuff, I found it and it was a lot of music. Even stuff that didn’t make Here Goes Nothing. Like I have two songs with Jazzy Jeff that didnt make it. There was some more Beatminers stuff and I thought, yeah you can get an album. It was really Evil Dee, because he still had the old sessions.

TK: What do you think age has taught you with some much time in the game?

SNM: It’s funny, I’m close with Jazzy Jeff, and he’s ten years older than me, so in my 20’s he told me that you spend your 20’s thinking you know everything then in your 30’s you realize you know nothing. So now in my 40’s, I asked “what that’s like?” And he said it’s great because you don’t give a fuck about anything, hahahah. And that is really how I approached making this record. Like I’m doing this because I want to and whatever happens happens. And it’s done really well.

TK: So can we expect more music, and how can people keep up with what you’re doing?

SNM: Yes definitely, with the album doing so well we’ve almost sold out of the vinyl, so the label is looking for more. I’ve got almost a new album written so I’ll be heading in the studio soon. And people can keep up with me on Instgram @shortienomass and always at shortienomass.com.