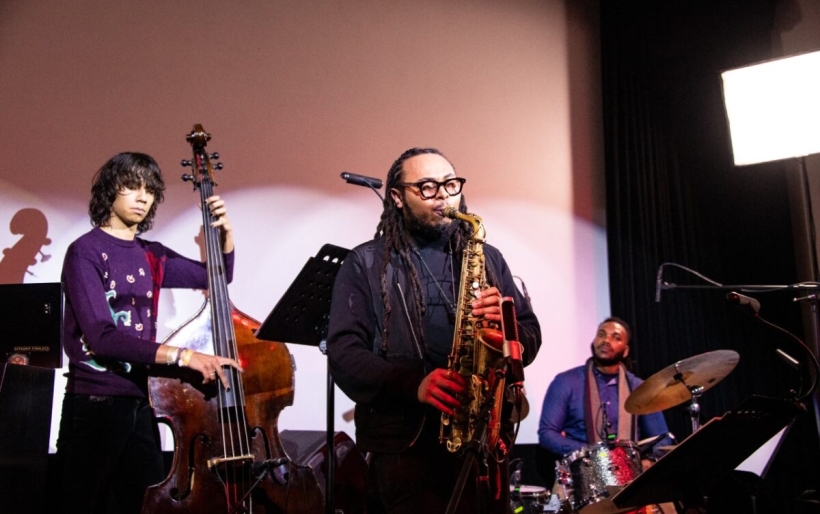 Immanuel Wilkins and his quartet have produced another work of staggering ambition, tenacity and spirit in The 7th Hand. The alto saxophonist, raised in Upper Darby and based in New York, released this seven-track suite Friday on Blue Note Records, hours after premiering the music in concert Thursday for a sold-out crowd at PhilaMOCA.

At age 24, Wilkins already stands in the vanguard of contemporary jazz with his bandmates by his side: Kweku Sumbry on drums, Daryl Johns on bass and Micah Thomas on piano. He’s a singular composer and bandleader straddling worlds of style, accessible as Braxton Cook and intellectually omnivorous as Jason Moran – the piano polymath who served as Wilkins’ mentor while he studied at Julliard and navigated the New York scene from 2015 to 2019. Moran produced the quartet’s 2020 debut Omega, which reflected on the horrors of anti-Black violence and the possibility of hope, stressing the band’s elastic prowess. Now we find Wilkins tumbling through a whole kaleidoscope of new concepts on The 7th Hand in 2022.

He draws inspiration from dance, literature, Bible tales, painting, fashion, film, as well as musical traditions across time and oceans. First, see Cauleen Smith’s understated video for the opening movements, “Emanation/Don’t Break,” (below) featuring family, fishing, braiding, kite-flying, and lovable double-dutch. Second, work backwards to Wilkin’s “DRAFT BOARD ON BLACK FOOTWORK” because don’t break means don’t break the dance, keep the trance, prayers and dances overlapping. Note the stunning photos by Satchel Lee, Wilkins on the cover in the gloved hands of Lana Turner. Then, turn to the record.

Wilkins composed The 7th Hand over several years even before the Omega release, focusing “moments on the bandstand where I felt like I wasn’t the one in control.” If six hands represent the whole of human power, as in a story from Ezekiel he had studied, the seventh represents the added force of divine intervention. He explored spiritual practices that “center the drum and dance” in Africa’s diaspora, framing a “preparatory piece for my quartet to become vessels by the end.” The result is a thundering seven-movement suite that gradually gives the four total, unfiltered power, carrying them from thorough, lyrical compositions to complete freedom: the culminating “Lift,” a suite itself at twenty-six minutes, features only one written note.

The first three movements feel familiar, before “Shadow” swings the band somewhere unseen. “Emanation” sounds most like Omega, ringing and alert, reintroducing the band’s bright cunning with melody and improvisation alike. But “Don’t Break” turns totally new for them, dancing through hypnotic love, buoyed by the slap of hand drums that soon take center stage. Farafina Kan Percussion Ensemble features brilliantly, including Sumbry on djembe and Camden’s Jamal Dickerson on doundounba – Wilkins cites his friend Sumbry’s dedication to West African drumming traditions as a catalyst for the quartet’s conceptual development, and their brotherhood shines. For me, “Fugitive Ritual, Selah” presses hardest on the heart, like a second chapter to “The Dreamer” from Omega, whose melody has held onto me now more than a year. Both arrive third, both begin with diatonic, totally lyrical improvisations by Johns, (I’d love a solo record from him) with a gospel sway they sweep through saxophone lines like lullaby, unhurried toward a restful close. Listen close for Sumbry’s fingertips and Wilkins’ breath. Improv aside, here is Wilkins’ composing at its clearest: measured melodies with piano and alto in duet or pensive unison, discursive forms, harmony stenciled from R&B and gospel standards, cool, and nudged by tender modulations only once in a while.

In fact, my favorite movements at PhilaMOCA were the coolest, with the least improvisation – “Don’t Break,” “Fugitive Ritual, Selah” and “Witness,” where flutist Elena Pinderhughes traces twisted harmonies, dark like Hindemith or Maria Schneider. Still, I have to respect the group’s extended improvisations, which center their mission of vesselhood on “Lighthouse” and “Lift” most of all. Although I’m less familiar with this style and sometimes felt lost at the PhilaMOCA premiere, I could see that this is where the band derives their motivation. Sumbry with inspiring firestorm, Wilkins ever devoted to Coltrane and Ornette Coleman, grunting between saxophone runs like he’s throwing a punch, but perhaps most of all the inexhaustible Thomas with his bombastic Monk-isms, unafraid to throw his elbows on the keys.

The quartet delivered all this like veterans on Thursday before a mausoleum packed with witnesses of all ages at Ars Nova’s first program of 2022. (Wilkins was last in town to play trio with Odean Pope and Chad Taylor for Ars Nova’s John Coltrane Symposium at The Woodlands in September, and last I saw this quartet was at Exuberance in 2018, a smaller show but no less complex.) At PhilaMOCA, I missed the drum ensemble on “Fugitive Ritual, Selah,” but heard the groove a whole new way – I counted “the 1” somewhere else, then brought that “1” back to the record the next day. I missed Pinderhughes’ contributions even more, but the four friends realized their suite with all confidence and gratitude anyway, beginning and ending two opposite places that both sounded like home. Their confidence was so deep, I even felt it unsettle the room. Here stood the crowd shoulder to shoulder (venue sold out, and then some) some of us nervous just to be out of the house this winter, wrapped in parkas, KN95s and trenches; here stood the band, brilliant purple under spotlights, impeccably dressed as ever, Wilkins rocking the mic to remind us how good he felt to play. This dynamic looked so funny to me – a dress code designed for common safety left us cowering in their glow. I remembered as I read Harmony Holiday’s fantastic liner notes: “The music has nowhere to hide.”

Of course, no one goes to the gig to “hide” from a pandemic, but Holiday stresses that these two tortured years have pushed some Americans into more confrontations than others, and this has everything to do with gathering in rooms anew in 2022: “Suddenly, we’re communicating with our built environment again, and we love the world enough to be as sharp and critical of it as we are forgiving and tender.” This quartet love the world, and they have much to share; this is what vesselhood looks like. I can only look forward to the suites, evolutions, records, looks and films I hope they share with us in years to come. In a winter where I feel so stuck in place, it inspires me to know some artists are still going everywhere at once.

Immanuel Wilkins and his quartet released The 7th Hand Friday on Blue Note Records, with tour dates across the US and Europe to come. Ars Nova programming continues this spring, including a trio show with Wilkins and Odean Pope on March 31 at RUBA. Thanks to Constance Mensh from Ars Nova for the beautiful photos of Thursday’s show at PhilaMOCA. Below, stream The 7th Hand and see the quartet play selections from Omega in their “Tiny Desk (Home) Concert” for NPR last February.