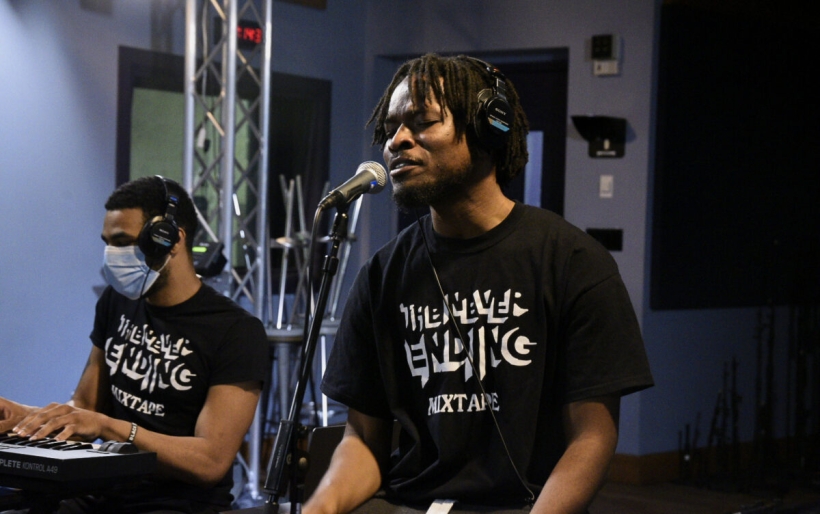 Philly’s Chuck Acid has been on the grind since 2017 when he released his first project, Food for Your Sole, but the post-quarantine rush of concerts in 2021 pushed the rapper, singer and songwriter into the spotlight in a big way.

A voracious music consumer, Chuck linked with the folks at 4333 Collective in the summer, and by fall he was playing their first ever-residency — a run of three shows at three different venues, opening up for three unique bills with three distinct audiences. It culminated with him playing a headlining show in November, teasing material from his latest project: The NeverEnding Mixtape Vol. 2, a new chapter in his ongoing story of life experiences covering the years 2018 to 2021.

Chuck’s music is vibrant and electric, calling to mind the bold expressiveness of some of the heroes he namechecks in his lyrics: Pac and Biggie, Nas and Jay-Z. When he stopped by WXPN studio earlier this month to record this Key Studio Session, he was eager to talk about parallels between the Philly underground he was currently navigating and the stories he’d read about the Brooklyn underground that a young Shawn Carter came up in.

While he can be musically hype, lyrically Chuck Acid is a vulnerable and introspective storyteller, digging deep to dish autobiographical rhymes about the fear and anxiety one feels as a young person coming up in the city (“Pootie Tang”); the warmth that comes with the support of a community of loved ones (“Interlude”); and the heartbreak and scorn you feel when realizing that people in your circle are only there when it’s convenient for them (“Family”). In this sense, he’s a kindred spirit of open-hearted MCs of the present day, like Saba and Kid Cudi.

Chuck’s live band at that run of shows was a high-energy five-piece, featuring many of his studio collaborators, but for this performance he scaled it back to just himself and keyboardist extraordinaire Joshua Hill for an intimate and emotive Storytellers-type set. Watch it below — he performs the three songs mentioned above, plus the new “December (GMC Pt. 3)” and a riff on Erykah Badu’s “Fall In Love (Your Funeral)” — and check out a gallery of images by our photographer / videographer Paige Walter. Chuck Acid plans to release The NeverEnding Mixtape Vol. 2 in March, keep your eyes on his IG for more details.