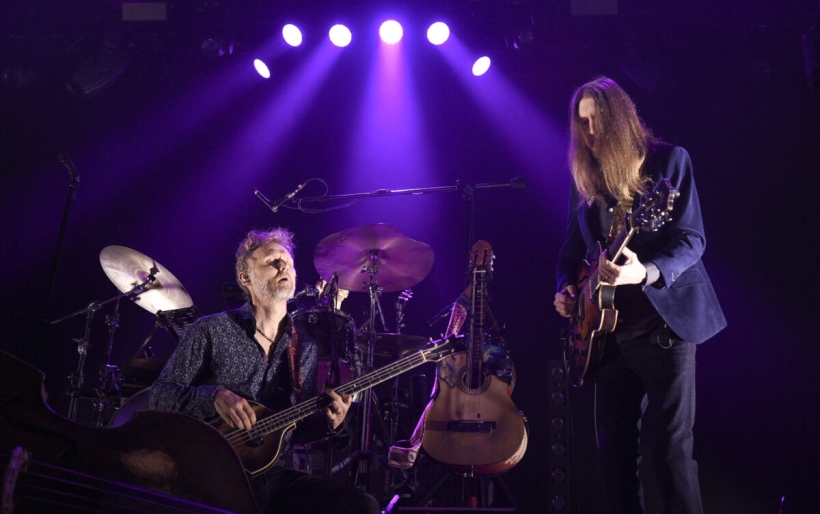 The Wood Brothers | photo by Paige Walter for XPN

Last Thursday night, on a rainy and unseasonably warm February evening, The Wood Brothers came to Philly’s The Fillmore. The Americana act, who were promoting their 2020 album Kingdom in My Mind, had the large hall packed with Western-wear-clad fans of all ages.

As the crowd filtered in, Canadian singer-songwriter (and amateur comedian) Steve Poltz warmed up the stage with a heart-warming acoustic guitar set featuring songs about friendship and new quarantine hobbies. Between songs he told jokes about the pains of growing older, and one failed attempt to buy marijuana for his mother, which charmed the like-minded and eager crowd.

With enough time between sets for the audience to refresh their drinks, the Wood Brothers then took the stage, opening with Kingdom’s first track, “Alabaster.” The trio consisting of brothers Chris and Oliver Wood and multi-instrumentalist Jano Rix have an-impressively full sound. Oliver Wood is the quintessential country-rock frontman, with a deep, warm voice and long locks and a wide-ranging collection of electric guitars. Chris Wood, formerly of jazz trio Medeski Martin & Wood, switched from electric bass to classical up-right, employing his bow for the set’s most tender moments. Rix is the group’s secret weapon, who can play a tight drum kit while multitasking on the electric keys. Oliver Wood introduced the band on the song “Little Bit Broken,” saying each member was “broken,” but it hardly felt like it to the crowd.

Most of the songs from The Wood Brothers’ set that night were from Kingdom, but the standouts were old tunes like 2008’s “Postcard From Hell” and “Laughin’ Or Crying” from the 2018 Grammy-nominated One Drop of Truth. Also outstanding was the way each band member played their instrument, as if it was an extra limb belonging to their body. The Woods also used the sides of their string instruments for gentle percussion on the stripped-down version of “Sing About It,” on which they shared one vintage large diaphragm mic.

The Wood Brothers closed with their hit “Luckiest Man” during the encore. “You are the best-singing city in the nation,” said Oliver Wood, making the rowdy Philadelphia crowd feel even more appreciative that their favorite band came to town. Check out the gallery of photos from the evening below.