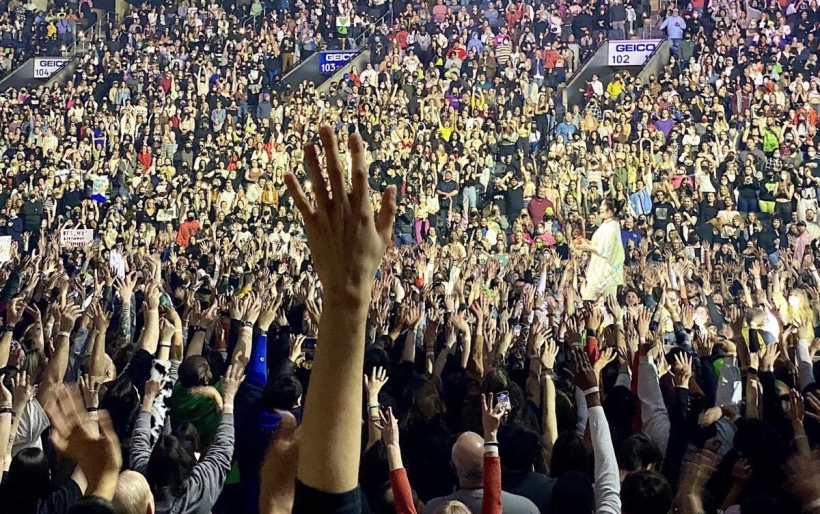 The duality of a Billie Eilish concert: she can make you acutely aware that you are in a crowd of thousands upon thousands, and she can also make you feel like you’re one of the only ones in the room.

The singer-songwriter and modern rock star had the Wells Fargo Center packed to the rafters last night for her Happier Than Ever tour; no small feat for a Sunday in February. Racing across the stage and up the catwalk to the riveting rhythm of “bury a friend,” Eilish leapt, pivoted, and pogoed, urging the sea of electrified fans to join her in singing along; the room was promptly soaked in deep red lights and a multitude of screaming voices.

Contrast that with a couple points later in the set, where Eilish stopped down proceedings entirely to spend what felt like 10 minutes at a time tossing boxes of autographed Valentine’s Day candy hearts to the outstretched hands of individual fans all around the arena, making sure there wasn’t section of the venue (within an arm’s throw, anyway) that missed out.

No small part of Eilish’s meteoric rise over the past few years is due to this deep connection she builds with her audience — checking in with individual pockets of the general admission floor any time she saw security scurrying around, working the crowd from the front row to the upper deck via a hydraulic lift, asking an exhausted-looking devotee at stage right “are you standing in barf?” and sharing an earnest laugh like they were two buds hanging out.

There’s also the magnetism she exhibits in drawing in new members of her crowd. Acknowledging the mix of fans, friends, and chaperones in the house, Eilish laid out a rule for the night: “No matter how old you are, no matter where you’re sitting, no one in this room is better than anyone in this room: we’re going to have fun together.”

Another not-small part of Eilish’s metoric rise, obviously: the music is intensely good on record, even better onstage, and has tremendous variety, from pulsing electro-rock ragers like “My Strange Addiction” and “Oxytocin” to soaring chanteuse moments like the grooving “Billie Bossa Nova” and “Halley’s Comet,” which she performed lounge-style with a standing microphone downstage.

Her lean backing band consisted of her brother Finneas on guitar, bass, and synth, alongside drummer Andrew Marshall, and though sequenced tracks obviously played a part in what we were hearing — as they do at any concert this size — the two instrumentalists brought an astonishing amount of sound and charisma to the room as well, from flashy fills and leads to Finneas taking a moment to strut down the catwalk and look a camera cooly in the lens, getting some LED screen face time for fans in the top of the venue.

The 26-song set saw moments from the mellow and introspective Happier Than Ever come to life tremendously onstage, their pulse rising to match the energy of Eilish’s 2019 album When We All Fall Asleep, Where Do We Go?. And some moments were mellow and stayed appropriately so; the Eilish siblings dueted on the haunting “Your Power” while seated on stools, folksinger-style, followed by Billie playing a cutting “Male Fantasy” alone.

The vibe shifted from intimate to spectacle and back, and the backing visuals were a huge part of it; during “NDA,” Eilish played off footage from the song’s music video on the towering LED screen, creating the illusion of walking a double yellow line as automobiles darted left and right around her. On “everything i wanted,” a live feed of fans filled the screen as she walked right up to it, bringing the audience up to her level where earlier she’d been down in the mix with them.

Even as the scale of her production could easily reduce everyone in the room to passive onlookers, a Billie Eilish concert makes everyone feel active and involved — being part of the show and being seen is the experience she wants to create, literally and figuratively. Going back to those Valentine’s candies, Eilish spoke for a moment about how much she loves Valentine’s Day, while reminding everying that Valentine’s Day doesn’t necessarily need to be exclusively about coupled romance. “You can be really happy alone,” she said. “You can be really happy with someone. Single or taken, you are loved.”