Magdalena Bay debuts at The Foundry with trippy visuals, electropop jams, and a high-concept show - WXPN 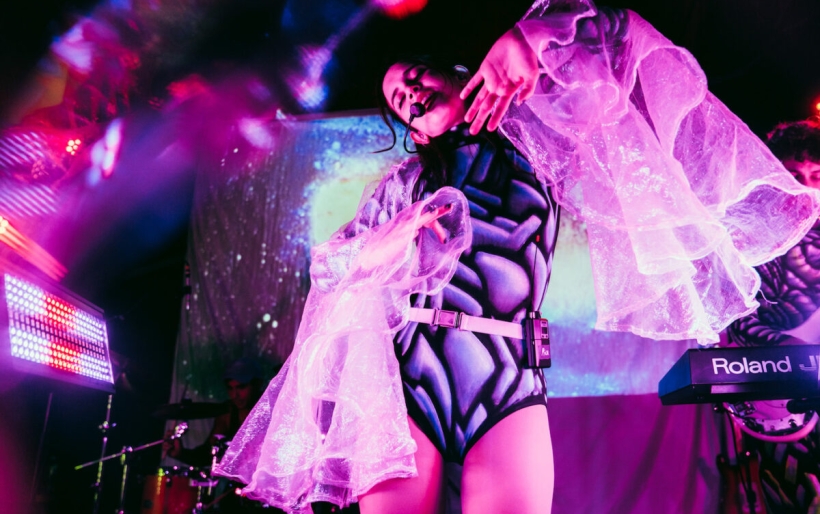 Magdalena Bay debuts at The Foundry with trippy visuals, electropop jams, and a high-concept show

“I was programmed by Magdalena Bay to be your guide through the Mercurial World,” spoke a giant projected thermal face named Chaeri to start off Magdalena Bay’s set in Philadelphia last night. The synth pop duo brought their debut headline tour to The Foundry and performed to a sold-out room.

The duo’s performance was high energy, with singer Mica Tenenbaum interacting with the audience, reaching out to grab hands of fans on the barricade, and even running out into the crowd. Their upbeat performance was complimented by spectacular visuals: matching costumes, stage design with fake computer monitors and flashing lights, and a background of visuals ranging from existential quotes and questions to trippy visuals.

The show was narrated by the mysterious programmed face, Chaeri. In between songs, Tenenbaum would interact with the projection, asking questions and giving commands. Chaeri started off the song “Domino” by singing the opening note. At one point in the middle of the set, Chaeri became sentient, stating “I want to find purpose, more than just an image on a screen.” The duo stated the face was asking too many questions and programmed the face to destroy itself, which resulted in a montage of glitches and crazy visuals as the face combusted. Chaeri came back at the end of the performance, though, to prompt the audience to clap if they wanted to hear an encore.

The Mercurial World tour isn’t just a concert. From the narration, to the visuals, to the story that is told throughout the show it’s a unique experience, which is an impressive feat for an artist and even more impressive for a first tour.

Check out a full gallery of photos from Magdalena Bay’s set at The Foundry below. Earlier in the day, the band stopped by WXPN studios to record a mini-concert for World Cafe; listen for that performance to air on the show later this spring.