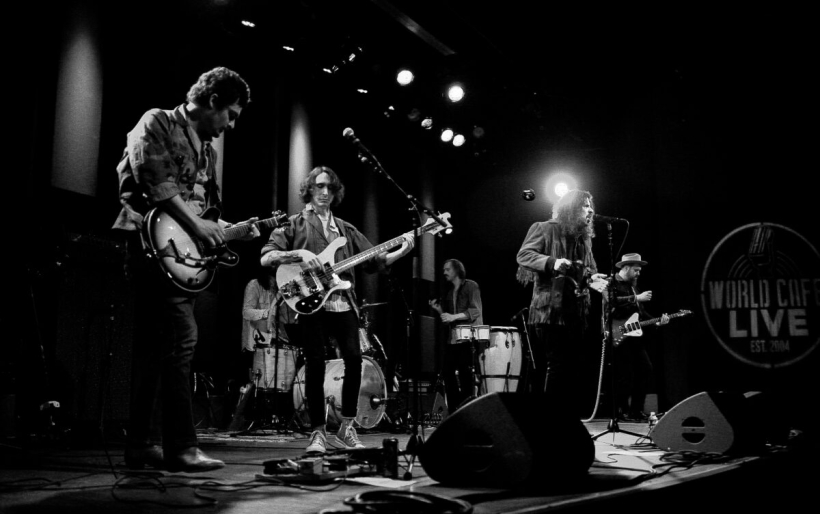 It’s rare that the music hall at World Cafe Live hosts a show as hyper-local as the one last Saturday night. The cavernous venue, which hosts XPN’s Free at Noon concerts every week, normally features national touring acts with strong fan bases here in Philly. Saturday’s bill, on the other hand, brought out three talented groups who are all rising through the local music scene — they’re our neighbors. And it was thrilling to see them graduate from upstairs’ The Lounge and rock the larger downstairs hall.

Sludge-rockers Slomo Sapiens started off the night strong with a high-energy performance They set the tone right: this wasn’t going to be a show you could sit down for. Philly’s resident “psych serpents,” as they’ve fittingly dubbed themselves, have been busy around town, playing recently at Underground Arts, Johnny Brenda’s, and upstairs in the lounge last October masquerading as The White Stripes. The Slomos are still hot from the unexpected relevancy of their debut LP Cabin Fever Dreams in 2020 — read Emily Herbein’s interview with the band about the album — as well as a string of singles and an EP, Slomos Vol. 1, in 2021. Fans, keep an eye out for new tunes coming out of Headroom Studios later in the year.

Delaware rock mainstay and now Philly regular Grace Vonderkuhn came on stage second. The garage rock threesome produces more sound than you might expect, and although they may have looked small on the wide stage that comfortably fits 10 musicians or more, they didn’t sound small. Frontperson Grace Koon seamlessly plays both rhythm and lead guitar parts, takes solos, and sings at the top of her lungs, and drummer Dave McGrory doubles on backing vocals as well. Multi-instrumentalist Brian Bartling, who plays bass with Vonderkuhn, even traded instruments with Koon for “Something to Say,” a bass-driven romp from 2018’s Reveries. Vonderkuhn’s setlist is always changing: they play a different mix of old and new songs (from a full album yet-to-be-recorded) every time they play live.

The night continued with nostalgic rockers Electric Candlelight, a Philly all-star supergroup with members of Ruby the Hatchet, Ali Awan, The Lawsuits, and more. “Sounds like Creedence Clearwater Revival,” said a member of the crowd who must not have recognized the irony of his comment: EC frontperson Owen Stewart also heads Kensington Clearwater Revival, a Philly-based Creedence tribute band. The recently-formed, six-person band played songs from their short discography, with a bunch of new songs in the mix, including single “Don’t Turn” that was released days ahead of the WCL gig.

The crowd, which comprised mostly friends and family and other industry players, knew they were in for a great show, and all three bands delivered. This bill could’ve easily been hosted at Fishtown’s legendary club Johnny Brenda’s, but the change of scenery was welcome. Here’s to hoping the success of Electric Candlelight, Grace Vonderkuhn, and Slomo Sapiens brings more all-local bills to the Music Hall in the near future. See photos from the night in the gallery below.