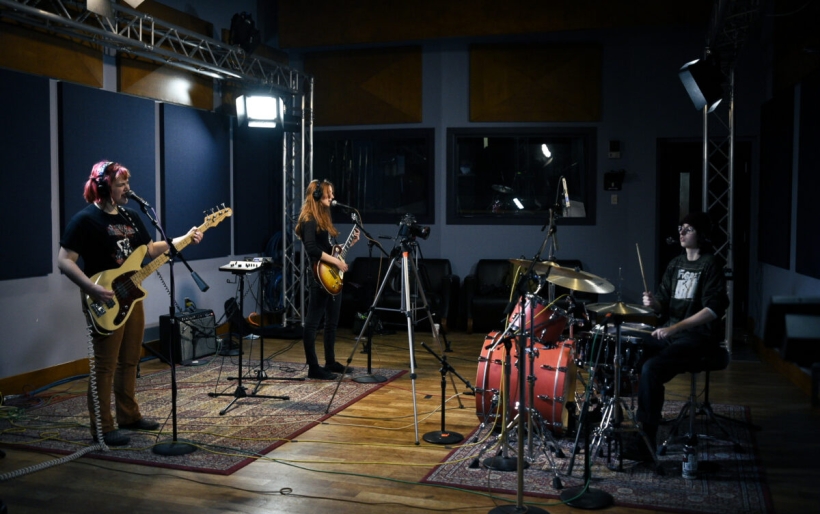 Considering that they only last week celebrated the one-year anniversary of their debut EP, Bucks County punk trio Froggy has accomplished a lot.

They opened for Catbite’s sold-out album release party at PhilaMOCA and gigged with personal heroes like The Dead Milkmen’s Joe Jack Talcum. They manifested a convenience store sponsorship for their song “7-Eleven Nachos” and got a sleek music video out of the deal. They’ve been celebrated everywhere from Doylestown Pride to Left Of the Dial Live and Preston and Steve’s Campout For Hunger.

And now they’re ready to make their next big move.

In the middle of Froggy’s Key Studio Sessions performance on WXPN Local this week, singer-guitarist Morgan made an announcement: the band’s new single, “Jimmy’s Song,” is coming out March 4th, and they can’t wait to share it with fans. Bassist Brooke says it’s a huge step up production-wise for Froggy, and is excited to share some of the behind-the-scenes folks who worked on it. (No spoilers, though.)

Meantime, fans and new listeners alike can enjoy raging to this set. “Midwest Emo Scum” kicks things off with some serious riot grrrl energy, taking down creeps and predators in the scene. The fun revenge story “Key Your Car” rushes at a NOFX pace care of drummer Fiona, then simmers down into a heady Minutemen-esque zone for “Livvie Folds,” where the band sings of escaping a toxic situation. “7-Eleven Nachos” closes it out on a fun, fast, and furious note; below, watch videos from the performance, stream the full set audio, and check out photos of the session by our Paige Walter.

Froggy’s back in Philly on Thursday night, February 24th, playing PhilaMOCA with Janna, Gloss, and Heatloaf; they’ll also open for The Warhawks at the First Unitarian Church on March 12th with UgLi and The Dead Flowers. Tickets and more information on both shows show can be found at the XPN Concert Calendar.