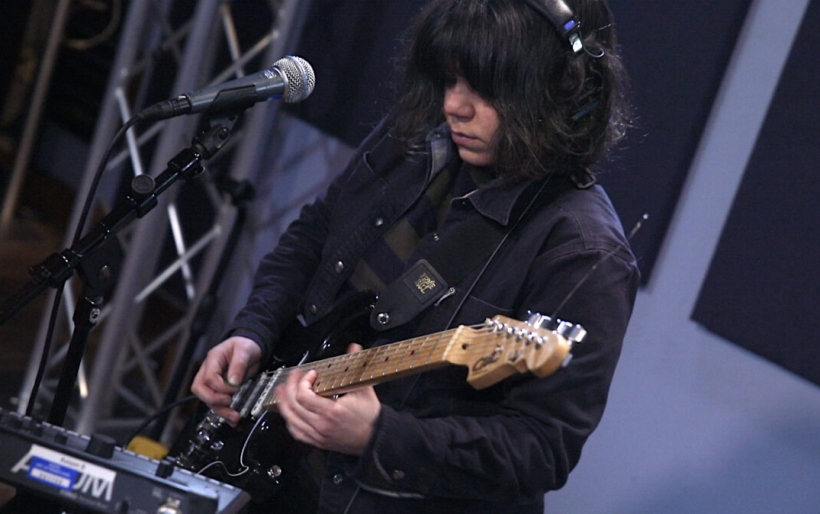 New Jersey’s Marissa Paternoster has built a strong reputation over the past decade and a half as the singer, songwriter, and shredder at the front of revered hard rock trio Screaming Females. So what does it mean when new music comes out under her own name? As we heard on Peace Meter, her solo album released in December on Don Giovanni Records, Paternoster still sings and still shreds, but perhaps in a more dynamic setting — one that encompasses beautifully evocative ambient atmospheres and lively dance beats at the same time.

And as much as the album deals with heartache and anxiety, Peace Meter also a space for transformative fun. During this week’s Key Studio Session with Paternoster and her band, keyboardist and vocalist Shanna Polley (of NYC’s Snakeskin) wore a t-shirt that said “I Love To Play Rock & Roll With My Friends,” a sentiment that was the exact vibe of this performance. Polley played a synth so vintage it stored sounds on a 3.5 inch floppy disc, a total conversation-starter as we were setting up. Meanwhile, dynamite drummer Angie Boylan (previously of Aye Nako, currently of Sleater-Kinney) kept the energy loud and lively, providing the perfect backdrop for Paternoster to crush it per usual.

The resulting set encompasses two songs from Peace Meter — the sad-yet-snappy “I Lost You,” the burning “Promise” — and two from Paternoster’s other solo project, Noun — the opening “Speak To Me” is from last year’s In The Shade, while “Sleepwalker” can be found on their 2018 album Slug.

Watch all four performances below via NPR Music Live Sessions, and see more from Paternoster and her band at one of the many gigs they have on deck this spring. This Sunday, March 6th, they’ll open for Laura Stevenson at Phantom Power in Millersville; they’re also the bill for Big Nothing’s album release party at Johnny Brenda’s on Friday, March 18th, and they’ll play The Lounge at World Cafe Live on Sunday, April 3rd with Ted Leo.

Get tickets and more information on all these shows at the XPN Concert Calendar. And get a copy of Peace Meterat Don Giovanni Records’ website, where you can find releases by Paternoster’s various other projects as well.