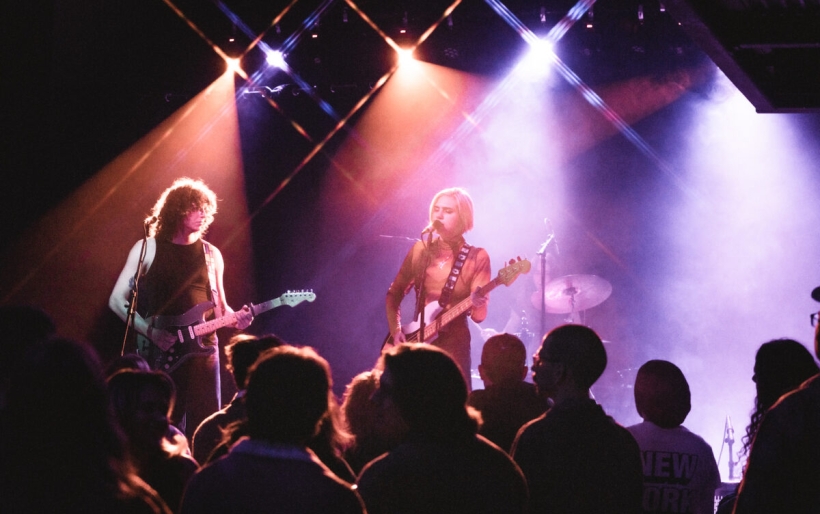 Saturday night in Lancaster County, the NYC rock group Sunflower Bean toured their upcoming album Head Full of Sugar to an intimate crowd at Phantom Power. The group kicked off the night with their 2021 single, which is also appearing on the new album, “Baby Don’t Cry,” followed by the “Twentytwo” off their hit 2018 release.

Before performing their new song “Roll the Dice”, which comes out today, bassist and vocalist Julia Cumming made a comment on our own human mortality and the uncertainty of things to come, setting the tone for the new album tracks. “Roll The Dice” exposes the evolution of the Sunflower Bean by giving the audience a new heavy-psychedelic rock driven tone, which was well received by several head-banging fans. Listeners were gifted with seven songs from the new album including title track “Headful of Sugar”, “I Don’t Have Control Sometimes” and “Beat The Odds”.  Other hits from the setlist include “Easier Said” from their debut album Human Ceremony, “I Was a Fool”, and “Somebody Call a Doctor” from their first EP Show Me Your Seven Secrets.

Sunflower Bean continues their tour in the US making a stop at SXSW Festival before eleven dates in the UK. They will be back in the area this spring for a record release show at Asbury Lanes on May 6th, followed by a show at The Foundry on May 14th. Tickets and more information con those can be found at the XPN Concert Calendar. You can pre-save Sunflower Bean’s new album Head Full of Sugar here.

Check out photos of Sunflower Bean’s set at Phantom Power below.