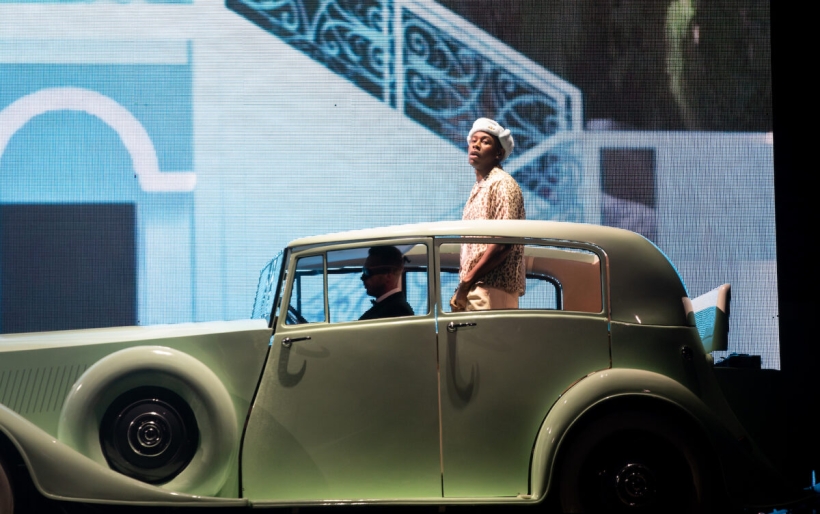 Tyler, The Creator | photo by Megan Matuzak for WXPN

Tyler, The Creator celebrated his birthday with a packed house at Wells Fargo Center

Nobody but Tyler, The Creator and his fans could’ve imagined that he would be one of the biggest names in music after seeing the video for “Yonkers,” in 2011. Since then the kid from Hawthorne, California has been putting in the work to make the vision of success he saw in his head become reality, and now as a man he’s enjoying the sweet ripe fruits of his labor. Those delicious fruits include having the cachet and cash to create his own music festival, Camp Flog Gnaw Carnival, and being able to book big name artists like Drake to perform.

The tasteful nectar also involves a respectable discography that includes three critically acclaimed albums such as Flower Boy, IGOR, and most recently Call Me If You Get Lost, which have allowed him to receive awards from MTV, BET and the Grammys. Recently Tyler has been traveling the country with music peers Teezo Touchdown, Vince Staples and Kalis Uchis for his Call Me If You Get Lost tour. Luckily for Philadelphia the date he came to perform on tour also happened to be on his birthday. One could could say that last night at the Wells Fargo Center was a great way for Tyler The Creator to not only celebrate his special day but also getting another beautiful reminder from his Philly fans on how far he’s came over the past eleven years.

Looking around it seemed the Call Me If You Get Lost had the Wells Fargo Center packed to the rafters, a perfect way for Tyler to celebrate. The stadium was filled with young people of different races who had two things in common; a high level of energy and, like the man they came to see, a strong passion for music. The night was filled with heavy metal, R&B, hip hop, and funk from all four artists, so it was safe to say each ticket buyer definitely got their money’s worth last night. Along with good music, the performances from each was A1, from the lighting to the background images, the stage presence was on point for every music artist. Makes sense though since the headliner is very particular about giving a good show for his fans so of course the opening acts would give the same effort. The first up bat to show that effort would be Teezo Touchdown who was ready to rock out on South Broad Street.

Tyler, The Creator is very energetic, so it makes perfect sense to have rockstar Teezo Touchdown open up the show. Songs like “Sucka,” “Technically,” and “Social Ques” was a great appetizer for the crowd to get rolling. Afterwards Vince Staples came out in a stylish black dickie suit with blue lights shining on the young hip hop artist. Whether it was from the most recent project Vince Staples, or past albums such as FM!, Big Fish Theory or Summertime 06, Philly enjoyed rocking out to the music catalog from the Long Beach, California MC. During his performance of “Take Me Home,” Vince decided to get personal a bit and rhyme while siting down. Then the energy picked back up as soon as he played “745,” and “Big Fish.” Vince ended his set with  “Norf Norf” which ignited the mosh pits and crowd surfing in Wells Fargo.

The crowd seemed to be enjoying themselves so far, but that enjoyment went to another level when it was time for Kali Uchis to get on stage. Soon as the lights went down and the music began to play all you heard in the stadium were people chanting “KALI, KALI!” Once the curtains opened and “Dead to Me” came on, all you heard was pandemonium of excitement from Philly once they saw Kali Uchis dripped in gold looking like a Colombian goddess. The whole crowd began to sing her songs such as “Dead to Me,” “10%,” and “Loner.” The singer was assisted with dancers in black leotards; their sensual dances along Kali whining her hips on stage made the crowd roar while she performed “fue mejor.” Her dancers then began to do an interpretive dance to Don Toliver’s “Drugs N Hella Melodies.” It was awesome to hear the crowd sing her lyrics to her songs that were in Spanish. It didn’t matter if they were aware of what she was saying in her lyrics, all that matter to them was that they really loved her music because it was so good. It’s a similar feeling that American music listeners get when listening to dancehall or Afro beat. The rhythm and the emotions the melodies from the crowd during Kali Uchis’ performance was a beautiful reminder that sometimes that’s all that matters when it comes to music. She ended her set by telling the crowd that today was Tyler’s birthday and then went on to play a fan favorite “telepatía.” After her set was completed, it was finally time for the birthday boy to make his appearance in South Philly.

As soon as the lights dropped, a short filmed played in the background of mountains, a lake and a mansion, as if it was vacation spot for a person with expensive taste. Once the video was over the crowd got hype to see Tyler, The Creator rising from the stage rapping “SIR BAUDELAIRE” in a old school turquoise 1939 Rolls Royce. The stage had a background of a turquoise mansion that looked to be rented out or bought by Tyler Baudelaire. Philly is known for having the some of the most skillful rappers in the game, so seeing him turn up and showing his skills of an elite wordsmith to tracks from Call Me If You Get Lost such as “Corso,” “Lemonhead,” “Hot Winds,” and “Lumberjack” was nothing short of amazing to the city of Brotherly Love. He took time to tell Wells Fargo that the first time came to Philly was when he was nineteen and that today he turned thirty-one. He then proceeded to have everyone including myself rap the verses to “Massa” along side him. It was obvious that Tyler was getting ready to take his fans on a trip of all the good music he’s created for the rest of the night.

Tyler decided to leave his mansion to get on a boat and perform “Wusyaname” in a sea full of Odd Future fans and even had them assist him on the song by rapping NBA Young Boy’s verse. Afterwards, Tyler got off his boat and onto a grassy field then began to get into his bag of classic joints. He performed songs like “Boredom,” “9/11,” and “See You Again” with colorful lights shining on him. Each time the beat dropped and he started rapping it felt like Wells Fargo was being moved by an earthquake, no pun intended. Tyler then did songs such as “IFHY,” “She,” “Smuckers, and “Yonker,” for his day ones who saw the potential in the Hawthorn artist 12 years ago before the rest of the world could see it now. Die-hard Wolf Haley fans lost their minds to see him rapping and getting jiggy to some of their favorite songs from his discography like “Bimmer,” “Rusty,” and “Tamale.”

After going down memory lane, Tyler  then got back on his boat to sing “I Thought You Wanted to Dance” in the middle of the crowd, and once he got back to his mansion he and Philly began to wild out to “Who Dat Boy.”  There even seemed to be a silhouette of hip hop artist A$AP Rocky in the mansion rapping his verse as if he was ready to make a surprise appearance in Philly. Once the song was over, Tyler let the crowd know that he loves to dance and asked them to join him while he performed the next two songs “I Think,” and “Earfqauke.” Fans began to move the beats while he was letting the boogie take over his feet all on stage. The next track Tyler did was his favorite song that he’s created from his catalog, “New Magic Wand,” which felt like a groovy heavy metal performance causing south Philadelphia to lose their mind. To end a great birthday performance, Tyler did “Run It Up,” and encouraged the city of Brotherly Love to never be afraid to grow and switch it up on people — something that was the theme of his big birthday show and his career as a whole.