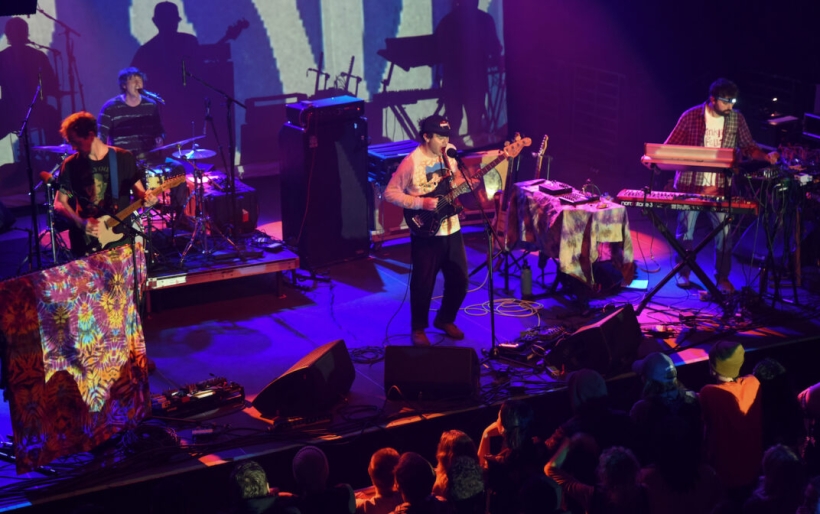 This past Wednesday eve at Union Transfer was a Kinder Surprise egg of a show designed by headliner and practiced hive mind, Animal Collective.

For those not familiar with Kinder Surprise eggs, it’s a chocolate egg with a crunchy and/or smooth center. There’s no indication on what’s on the inside, you get what you get. For those fortunate enough to experience opener L’Rain, you got that rewarding deliciousness. The band are alight with the core of Animal Collective’s view of themselves and their legacy.

Animal Collective is a band that reached into a musical and unidentified sect of early 00s music, grabbed a handful (millions) of ears and walked away with it. The band quickly situated themselves as musicians who created their sound from the ground up, translating to a bevy of audio modulations and recording techniques that created a new category for many people in the psych pop/electronica-sphere of indiedom.

But this isn’t an Animal Collective history lesson, it’s a recap of an amazing show.

Brooklyn’s L’Rain, aka Taja Cheek, also values a ground up approach to their sound. While Animal Collective pulls from 80s synthesizer styles and psychedelia, L’Rain pulls from funk and jazz. Taja is a multi instrumentalist, she played both the guitar and the bass during the set. Her command over vocal sampling, paired with her masterful band mates secures L’Rain as part of the multi instrumentalist universe along side Animal Collective.

In support of the Kinder Surprise egg metaphor, it’s worth mentioning that Taja is a big fan of Animal Collective. “I’m so glad you are all here. I just can’t wait to see Animal Collective,” Taja said with a nervous laugh.

Taja used her voice to emulate birds chirping and singing in “Stay, Go (Go, Stay)” and accented melodies with screams that felt like they were taken from inside of sealed mason jars in “Alive and a Wake.” Her bandmates sowed in their own inclinations and expertise so well, that each song was as equally unpredictable and enriching as the next. Like the suspense of the drummer’s dynamics and distorting guitar feedback by dragging a guitar across the monitor also during “Alive and a Wake,” for example.

Tie dye head shop tapestries covered the various synths and instruments positioned around the Union Transfer stage for Animal Collective’s set which was accompanied by trippy projections tailored to almost every song. All four members were eager to deliver their unique musings, Avey Tare at the multi-instrument and vox helm, Panda Bear on drums/vox, head lamp sporting Geologist on keys and Deakin on keys/vox.

Most of Animal Collective’s set was a will they or won’t they play “the hits” — namely “My Girls”, or even “Leaf House.” Several times in the set and the encore it felt like there were about to just fall into those songs but pulled back at the last second. That’s not to say that Sung Tongs and Merriweather Post Pavilion didn’t get play time.

“Can you guys give me a note?” Avey called out to the crowd mid way through the set. And boy did they.

Animal Collective played a Panda Bear heavy favorite, “Chores”, as well as the vast majority of their newest and latest album, Time Skiffs, including “Dragon Slayer” and “Car Keys.”

Without a doubt, Animal Collective was enveloped by their own musical kool-aid, enjoying the areas to rediscover and reimagine their decades spanning discography. The crowd, which was made up of people who could identify the span of the band’s discography from memory to the younger people who were maybe born around the time Dance Manatee (2000) or even Hollinndagain (2002), also felt a deep connection taking place. Eyes closed and harmonizing along, Animal Collective’s set was cathartic.

Animal Collective means a whole lot to a lot of people and Wednesday night at Union Transfer was proof of that.