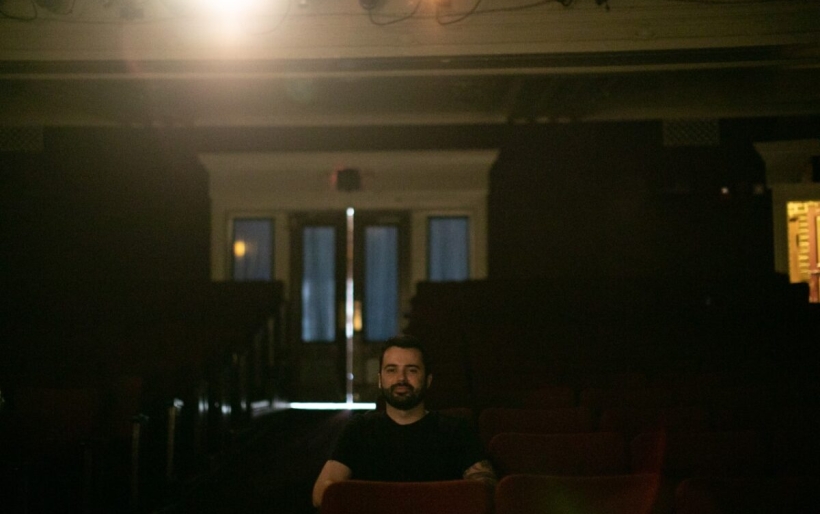 Versatile Philly bassist Jack Zaferes takes the stage at Center City theater Plays & Players, playing each instrument one by one, and then frantically morphing into split versions of himself, leading to a cathartic, destructive finale.

Versatile Philly bassist Jack Zaferes has worked with a range of artists, including Stolen Rhodes, Curtis Cooper, and Underwater Country Club — on his own, he makes thrilling instrumental compositions that straddle the worlds of atmospheric jazz fusion and propulsive post-rock, and those elements collide in the explosive music video for his latest piece, “Amygdala.”

An impressionistic song reminiscent of early Caribou as much as Philly peers Square Peg Round Hole, the song is filled with warm, chiming melodies juxtaposed with intense rhythmic elements; in a Scott Walker kind of way, Zaferes built the beat in unconventional manner, recording the sound of a calf’s brain dropped on a table for the kick drum, and a firecracker blowing up in the studio for the snare.

The music video, directed by Michelle Goodwin, adds a deeper dimension, as we see Zaferes onstage at Center City theater Plays & Players, playing each instrument one by one, and then frantically morphing into split versions of himself, leading to a cathartic, destructive finale.

Over email, Zaferes says the piece was written as an outcry to the pandemic: “It was a screaming reverberance to the desolation I felt, and a realization that the things I had worked hardest to achieve had completely melted away. That performing music might never happen again. These feelings released an emotion in me that was primal, visceral and depressing. I wanted to push through and try to make a work of my own that would personify the feeling I was having during these episodes of dread.”

Compositionally, the rhythms and melodies are representations of the molecules released in your brain during a panic attack; Dopamine, Epinephrine, Norepinephrine and Cortisol. “The Amygdala is the almond shaped organelle in our brain responsible for all this mess,” Zaferes writes. “Thus the naming of the composition.” The music video personifies this agitated state, and finds release and salvation in destruction.

The single will be released May 6th, and Zaferes tells us more visual elements are in the pipeline. In the meantime, watch the “Amygdala” video below.