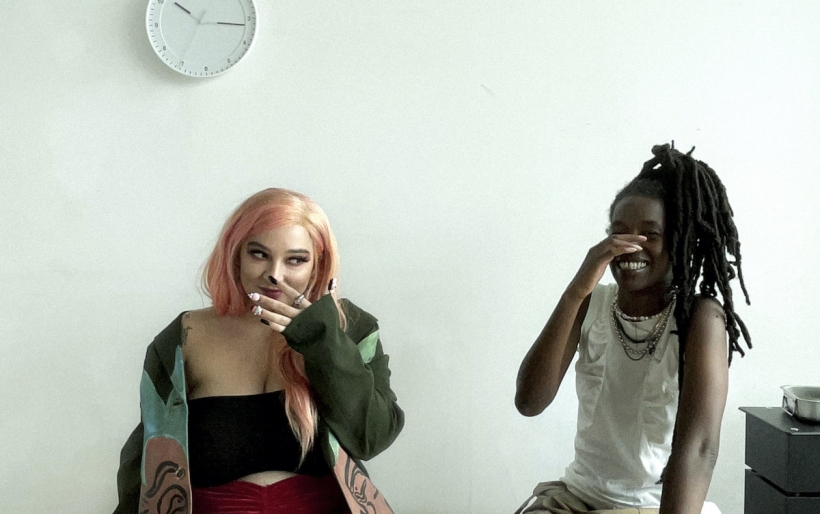 700 Bliss will release their debut album ‘Nothing To Declare’ this spring; listen to heady single “Totally Spies”

700 Bliss teases their first full-length album on “Totally Spies,” which is tense and atmospheric, with bass drops, eerie synth notes, and vocals that are otherworldly as often as gravelly.

One of the most thrilling collaborations to come out of West Philly in recent years will release its first full-length album this spring. 700 Bliss is the impressionistic project of DJ Haram and Moor Mother, and it fuses the former’s mix of bracing beats and noisy atmospheres, with the latter’s trademark blurring of the lines between poetry, rap, and haunting vocal soundscaping; their album Nothing to Declare builds on the groundwork laid by their 2018 EP Spa 700, and will release via Hyperdub on May 27th.

It’s their first full-length project — though Moor Mother has a prolific body of work on her own, most recently including her ANTI- Records debut Black Encyclopedia of the Air last year, and DJ Haram has an impressive discography as well, from 2019’s Grace LP to last year’s Era EP. The track listing for Nothing to Declare includes collaborations with peers including New Jersey native Orion Sun.

Parisian artist Lafawndah teams up with 700 Bliss on the album’s teaser track “Totally Spies,” which is tense and atmospheric, with bass drops, eerie synth notes, Lafawndah’s otherworldly voice accompanying Moor Mother’s gravelly flow, which here is mixed with autotune for amazing effect. As the two-minute song progresses, the subtle beats give way to a sunburst of darburka drums that carries the track to its peak.

Listen below, and grab a pre-order of the record over at Bandcamp.