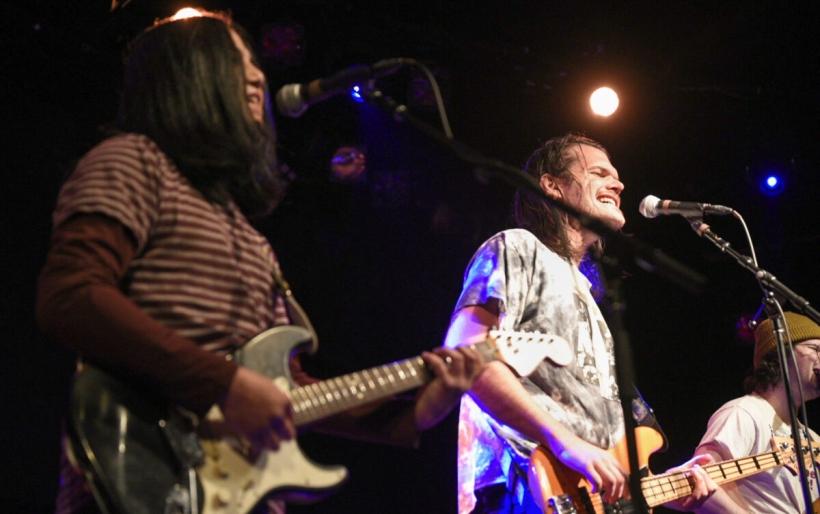 To aid first-time listeners at the band’s Free at Noon concert, two t-shirts worn onstage by New Jersey jammers Garcia Peoples provided sign-posts to help digest the expansive set we were about to consume.

Despite the obvious reference in their name, the shape-shifting, sonic-adventuring New Jersey five piece Garcia Peoples falls into that chic territory of “we’re a jam band like The Velvet Underground, not a jam band like Grateful Dead.” Not that it makes all that much difference, sonically, once you move beyond leftover pop cultural baggage of the 60s and 70s…but to aid first-time listeners at the band’s Free at Noon concert, two t-shirts worn onstage provided sign-posts to help digest the expansive set we were about to consume.

Singer-guitarist Tom Malach, at stage left, wore a Moby Grape t-shirt, a respectable nod to the San Francisco Bay Area eclectic psychedelic outfit of the mid-60s, while bassist Andy Cush at center stage wore a tie-died Sonic Youth shirt, celebrating NYC’s premiere noisy experimental alternative band of the 80s through the 00s. Garcia Peoples’ set went on to deliver both sides of that spectrum, via interlocked guitar grooves and resplendent piano in the spirit of contemporaries Kevin Morby and Ryley Walker, with heady instrumental segues and bursts of free-form guitar fuzz.

Their hour-long performance was epic by F@N standards, but a midrange set for GP, and the band — which also features Danny Arakaki on vocals and guitars, his brother Chris on drums, and keyboardist / multi-instrumentalist Pat Gubler — touched on their newly-released LP Dodging Dues, released in January on Philly label No Quarter. Five of the album’s seven songs made an appearance, with the dream-like “Cold Dice” opening the main set and the punchy “False Hopes” starting off set two. In between, a shouted out fan request yielded a sublime eight-minute “Total Yang” from 2019’s Natural Facts; we also heard that album’s “High Noon Violence” to close the performance, a pensive “Fire of the Now” from 2020’s Nightcap at Wits’ End, and what might have been a freeform farfisa jam, an appendix to “False Company,” or an entirely different piece.

Listen to the performance in full below and check out a gallery of photos by WXPN’s Paige Walter. Pick up Dodging Duesnow, via No Quarter.