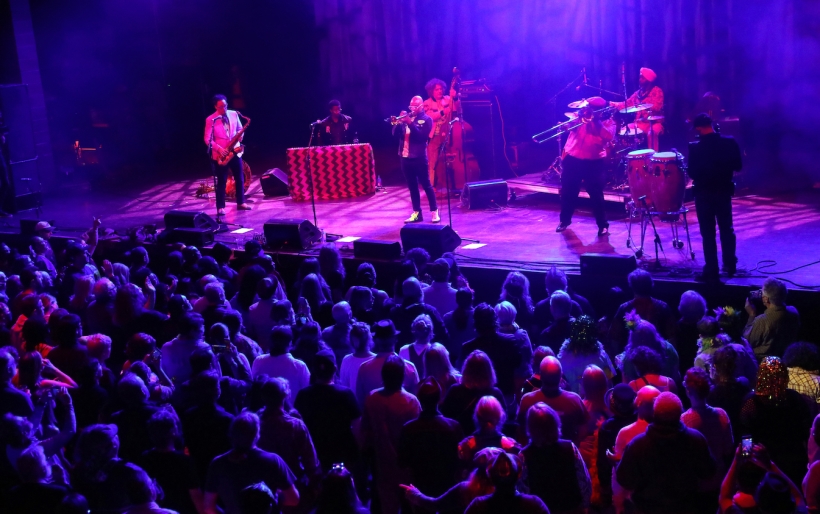 WXPN’s Kanaval Ball was the culmination of over two years of activity.

After two rescheduled dates due to the pandemic, the third time was the charm to celebrate the grand finale celebration of the Kanaval: Haitian Rhythms and the Music Of New Orleans project. On Sunday, March 20, the music of New Orleans and Haiti came together for a four hour kanaval ball at The Fillmore Philadelphia, featuring sets of music by New Orleans’ Preservation Hall Jazz Band, and Boukman Eksperyans and RAM from Haiti. The evening also included beautiful dance performances by the New York City based Haitian folkloric dance company Nadia Dieudonné & Feet Of Rhythm, and Philadelphia based DJ J-Star, who provided dance music throughout the evening.

WXPN’s Kanaval Ball was the culmination of over two years of activity that included the Philadelphia premiere of Breaking The Thermometer by Leyla McCall at Philadelphia’s Fringe Arts, a video documentary series of Haitian creatives in Philadelphia, a special Haiti Flag Day concert performance by Paul Beaubrun and friends filmed in Port au Prince, and a radio documentary and limited podcast series hosted by McCalla illustrating the connections between the music and culture of Haiti with the music of New Orleans.

“Sometimes I think Haiti is New Orleans and New Orleans is Haiti” said Preservation Hall Jazz Band’s bassist, tuba player and creative director Ben Jaffee from the stage at the Fillmore. Jaffee, who also served as an editorial consultant on the project, called our Boukman Eksperyans, RAM, and the dancers from Feet Of Rhythm, and proceeded to bring everyone together with a funky, smoldering, and rousing 20-minute version of “Iko Iko” that brought all the band members together and brought the enthralled audience out of their seats and on to the dance floor. It was a glorious, magical night of Haitian and New Orleans music and culture, with a side of Philly.