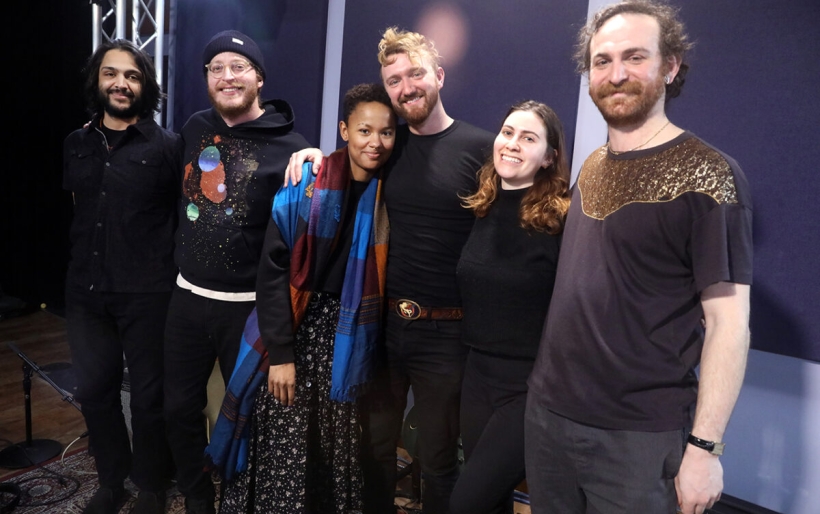 “All of us are drawing on our different experiences, connecting to the spirit of the music,” Alex Farr of Justmadnice says about their Key Studio Session. “This set has a spiritual component, I feel.”

When singer-songwriter Alex Farr first released music under the name Justmadnice in July of 2021, the title of the project was quite apropos. Small is a short EP of five introspective songs, most featuring only Farr’s warm and emotive voice, their electric guitar, slight flourishes of trumpet and other instrumentation, and a lot of open space.

The six-piece band that visited WXPN studios for JMN’s Key Studio Session is, as Farr put it while we set up, a massive transformation from those humble beginnings — it’s expansive, immersive, loud and transcendent. Taking Justmadnice’s indie-folk roots, their bandmates have launched them into the realm of blues-dipped psychedelic jazz; and that’s only the beginning.

“With Small, I released that with the intent of letting go of those smaller feelings,” Farr says of moving from candid emotional vignettes to turbulent storytelling with their work. “Creating larger music was part of this path.”

Farr says they’ve always been attracted to louder and more dynamic songwriting; they cite Wye Oak’s “Civilian” as a piece they aspire to compositionally, and name Moses Sumney and serpentwithfeet. as other sources of inspiration. Farr particularly loves the idea of bringing an element of “psuedo-organized chaos” into their work. They connected with their bandmates — Erik Kramer on bass, Alyssa Almeida on cello, Keaton Thandi on drums, Mark Menk on guitar, Marty Gottlieb-Hollis on trumpet — organically through the scene, and had an instant chemistry. “I feel like having met who I’ve met, we’re all such talented musicians, we can show up in a space together, and usually it comes out beautifully.”

They’re not kidding. Justmadnice is only the second band in Key Studio Sessions history to nail their set completely in one take, and this suite of songs — the swelling “Willow Child” easing the set to an open, the meditative “Blood Moon” bursting and decaying like Bardo Pond, the gothic blues tones of “Hunny” recalling Adia Victoria, the breathtaking “Water and the Wind” taking the set to a sublime denouement — showcases the power in a room of musicians with 100% trust in one another.

“All of us are drawing on our different experiences, connecting to the spirit of the music,” Farr says. “This set has a spiritual component, I feel, and when I enter the practice space, I usually tell the story of what’s behind the songs, to get people emotionally on the same page.” The opening “Willow Child,” for instance, is about an enslaved person who has escaped and is telling their child to stay by a willow tree, promising they’ll return and protect them. Subsequent songs travel across the narrative from there, and the bandmates in Justmadnice follow in step, responding musically to the journey.

Watch Justmadnice’s stirring Key Studio Sessions performance below, and experience it in person when the band plays The Dolphin in South Philly on Thursday, March 31st with Sug Daniels and emospacebird.; tickets and more information on the concert can be found at the XPN Concert Calendar.