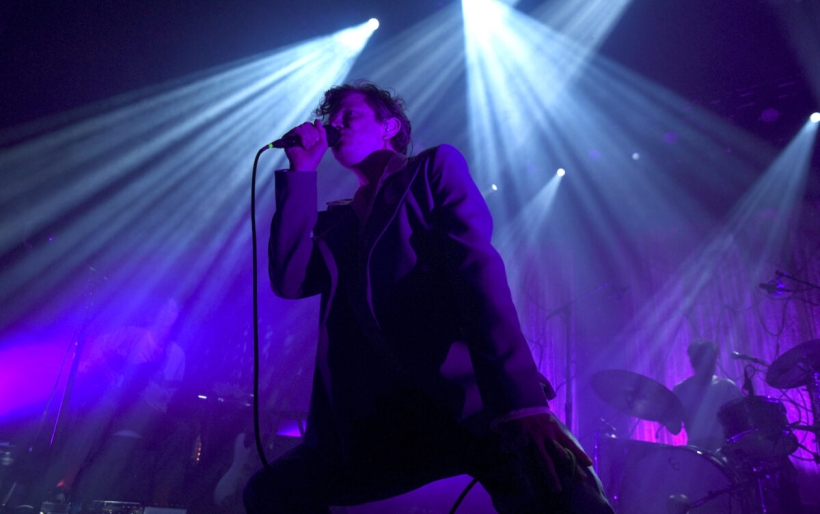 Wrapped in hazy smoke, purple beams of light, Duffy cracked a joke a few songs in about playing whatever they pleased when people are actually paying attention after the first couple of songs.

Not before their sincere observation of the captivated crowd at Union Transfer this past Wednesday night, “I really feel like you are listening…”

Duffy was having quite a chatty night, and mused about playing these songs stripped down to guitar, loop pedals and vocals. Hand Habits is their personal work that exists outside of the many recording projects they are doing at any given time. Rather than hearing these songs via a laptop, they felt like the music could breathe. 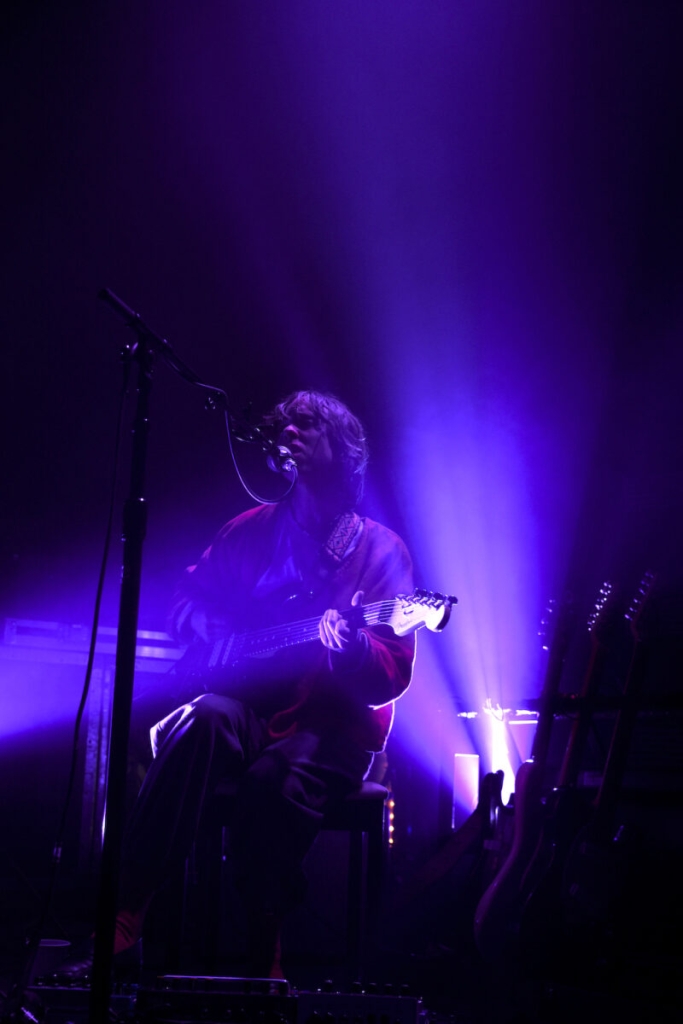 Duffy strums a beat and loops it, shifting to harmonious melodies, completed by Duffy’s airy vocals for a very moving rendition of “Aquamarine”. The lyrics to the song are poetic and heartbreaking; the expressions on their face seemed to note that they were reliving certain emotions about the girl and the night the song speaks to.

After the obligatory appreciation for Philly’s innate “rowdiness”, Hand Habits shredded hearts again with the song “Graves” also from Fun House. In a vulnerable moment, Duffy forgot the words, lost in the moment. From somewhere up in the balcony someone suggested “Hum!”, earning a laugh from Hand Habits before picking it up again. So while rowdy, we are also supportive. 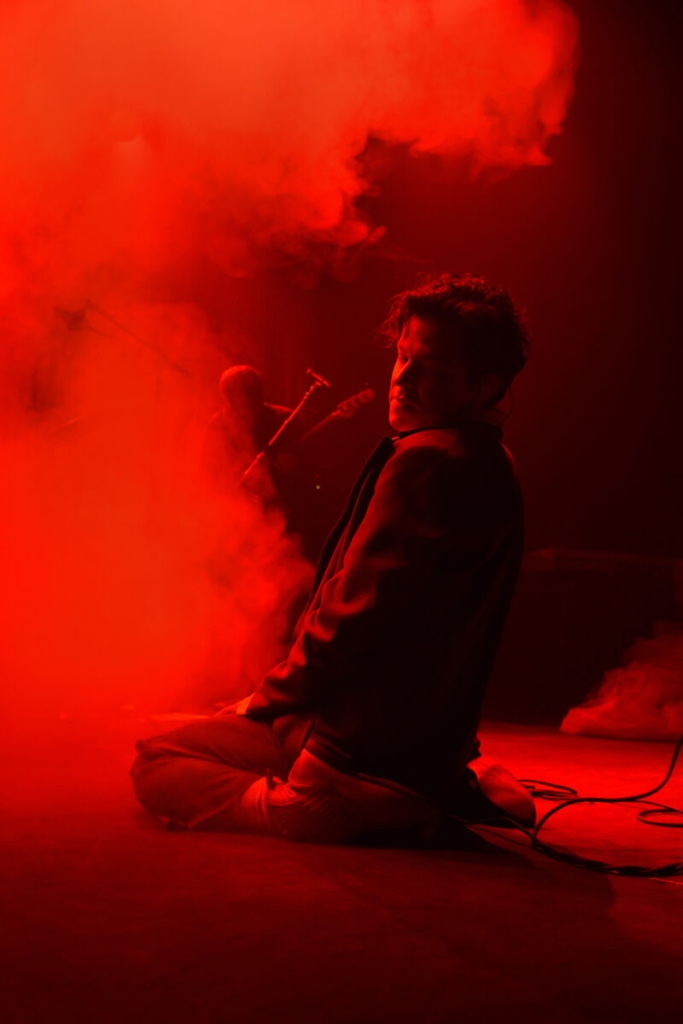 Stepping onstage for Perfume Genius’ headlining set, immediately Michael Hadreas established a raw, electric energy that would carry through the set. Hadreas entered sporting a baby blue 70s style suit with a pointy collared white button down and boots. The band, arranged in an arc behind him, created this large space in the center for Hadreas to play and make every move count. This was especially present during the multiple back bends and lots of shoulders.

Fans of the band dressed in pastels, sparkling gems and glitter. Others were on a whole other level, more high fashion. There were couples slow dancing. Together they made up a crowd of people who knew and hung onto every last lyric from Perfume Genius. And wooed loudly when Mike whipped off his suit jacket.

The whole set became so cohesive with the next level stage lighting.  Like being enveloped by smoke to a dramatically backlit Michael with arms wide singing front and center stage to the way the lights captured the movements of the band. Perfume Genius also capitalized on the quick fade to dark between songs, giving the whole experience a nostalgic and between scenes musical feel. It was incredibly immersive feeling. 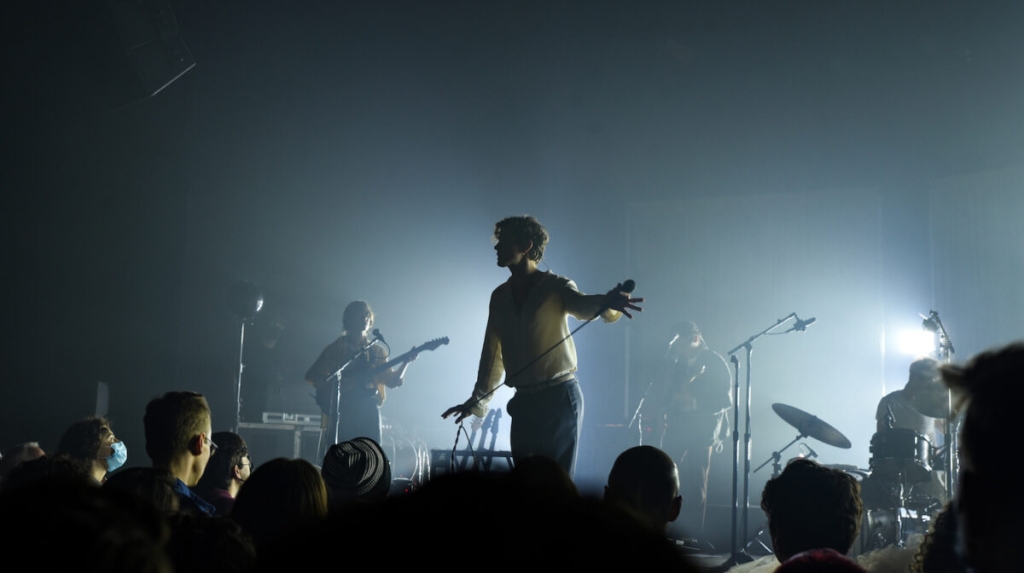 Alan and Michael sat at a synth and played their song “Learning” like they always have, 13 years of performing together by Michael’s own accounting. While the set was high energy, the “quieter” songs, as Michael referred to them, like the balladic “On The Floor”, and later “Otherside”.

The last few songs, as well as the two song encore, explosively jumped to a more intense tone. An intense tone that visibly reignited Hadreas, he was all over the stage, even taking a tour around the stage, passing behind the bank completely lost in the music. Their energy raced into the crowd, “Slip Away” boomed through Union Transfer, “Describe” too.

Really, Perfume Genius was just thankful to be there. They didn’t get to tour Set My Heart On Fire Immediately at all, so two years down the road Perfume Genius was more than ready to blow people away,  which Union Transfer was grateful to experience this past Wednesday night. And it seems we’ll see them again sooner than we realized, as Perfume Genius announced their new album Ugly Season the very next day. Here’s hoping.