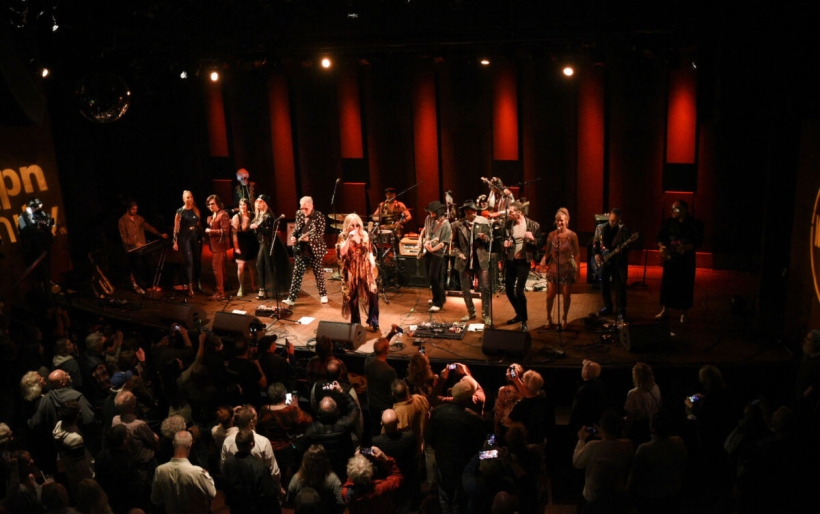 Candy Volcano, the Philly-based David Bowie tribute act, finally celebrated Bowie’s birthday at Free at Noon after rescheduling due to the Omicron variant.

This week’s Free at Noon was a celebration of David Bowie’s birthday…just a few months late. Candy Volcano, the Philly-based tribute to the Starman, was originally slated to play Free at Noon during Philly Bowie Week, but the Omicron variant had other plans. Regrouped and refreshed, the band arrived at the Music Hall at World Cafe Live ready to rock through hits and deep cuts alike.

The stage was packed with 16 instrumentalists and vocalists alike, ready to recreate the densely-textured rock and roll bombast of Bowie’s 70s work. Album tracks like “Bombers” from Hunky Dory, “It Ain’t Easy” from The Rise and Fall of Ziggy Stardust and the Spiders from Mars, and “Win” from Young Americans front-loaded the set and shone brightly — Candy Volcano even gave “Bombers” a modern lyrical twist, updating one lyric to “the Pentagon sent a cable and the Queen an Instagram.”

“Look Back In Anger” from Lodger welcomed us to a back-end of the set packed with Bowie classics — “Queen Bitch,” “Rebel Rebel,” and “Suffragette City.” For an encore, the band returned for a Bowie-adjacent song: a fierce cover of Queen’s “Keep Yourself Alive.”

Listen to the set and check out photos below, and for more on Candy Volcano, get with them on Instagram.