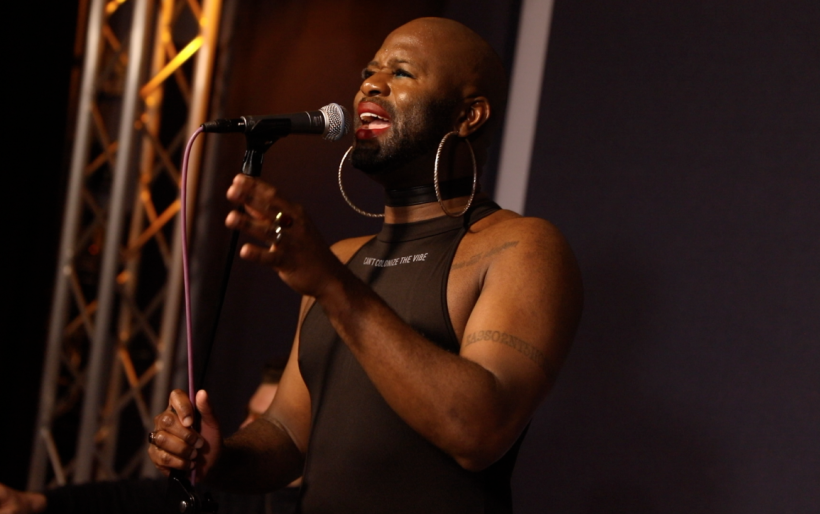 There are any number of ways you might have encountered Philadelphia’s Solomon Temple for the first time. Perhaps you watched an episode of his Songs For The Soul video series, spotlighting his peers in the city’s creative arts scene. You might have heard him in conversation with renowned Philadelphia poet Ursula Rucker on an edition of Intercultural Journeys’ Close-Ups. Maybe you were walking in the vicinity of Fishtown’s Theory Gallery and saw his confident and compassionate visage looking out from a mural on the wall.

For us, we were blown away by Temple’s golden voice booming from the World Cafe Live stage this February, as he joined his friends Omar’s Hat in a 25th anniversary tribute to Erykah Badu’s landmark album Baduizm.

Temple, in many ways, has been around — forging connections, taking part in collaborations, and building his presence on the Philadelphia scene. On the other hand, he’s just getting started, and in 2020 released his soaring debut single “Call Me Crazy,” a song about the profundity of one of his central themes: love. In this week’s Key Studio Session, we get a taste of the other music Temple has in his burgeoning catalog.

Joined by guitarist Eoin Murphy of Brushstroke and percussionist Adam Bailey, Temple delivers an intimate set that spans brilliant pop, loungey jazz, and fervent soul. His impassioned vocal on “I Gotta Get You Back” will absolutely floor you as he sings of regret and desire. The strength of “Lies and French Fries” is its scene-setting and storytelling, the way it places you in a booth in a Center City diner as the narrator nurses a freshly broken heart. And the rippling soul of “Rapture,” propelled by Murphy’s nimble guitar lick and Bailey’s meditative conga beat, channels the introspective energy of Marvin Gaye’s What’s Going On.

Watch all four of this week’s Key Studio Sessions performances in the videos above and below; for more, follow Temple on Instagram at @solomontemplelovepage.