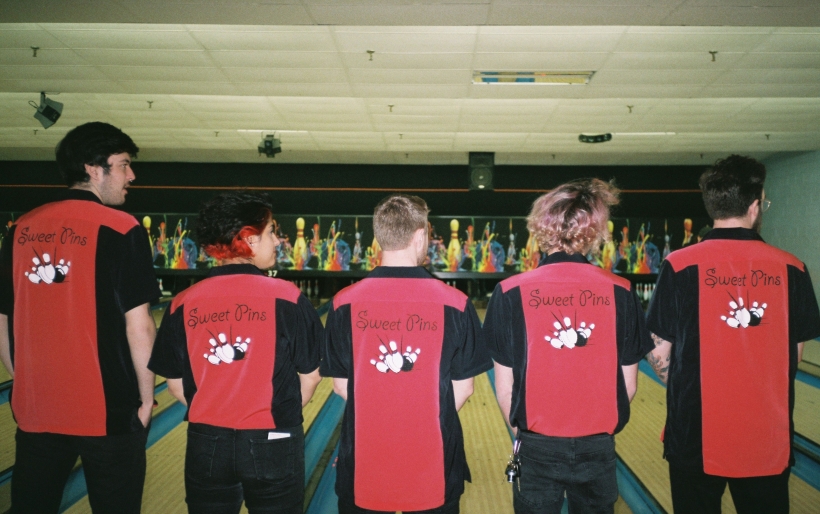 Sweet Pill | photo by Nick Moretti courtesy of the artist

The high-energy song is the second after “Blood” to be released from Where the Heart Is, due May 25th.

Philly emo-pop rockers Sweet Pill just shared their latest single “High Hopes” and an accompanying music video ahead of their forthcoming debut LP via Top Shelf Records. The high-energy song is the second after “Blood” to be released from Where the Heart Is, due May 25th. In the video for “High Hopes,” Sweet Pill, or “Sweet Pins” as they’re known around the bowling alley, face off against rival team The Gutter Goblins.

“The idea for shooting a music video at the bowling alley initially started as a joke as we and our friends get together on a weekly basis for bowling,” says Sweet Pill vocalist Zayna Youssef in a press release. “Keeping our heads held high even though we are being sabotaged by the Gutter Goblins is how we feel connected to the theme of ‘High Hopes.’” The real-world antagonist of the song, as Sweet Pill revealed on Instagram, was the pandemic, and facing a future of canceled opportunities during the first shutdown. The band kept their hopes high, however, and emerged on the other side of shutdown with a new album and record deal.

Watch the video for “High Hopes” below, and stay tuned for more from these formidable up-and-comers. In the meantime, you can see them play the First Unitarian Church on Saturday, April 16th as they open for Carly Cosgrove’s album release party. More information can be found at the XPN Concert Calendar.