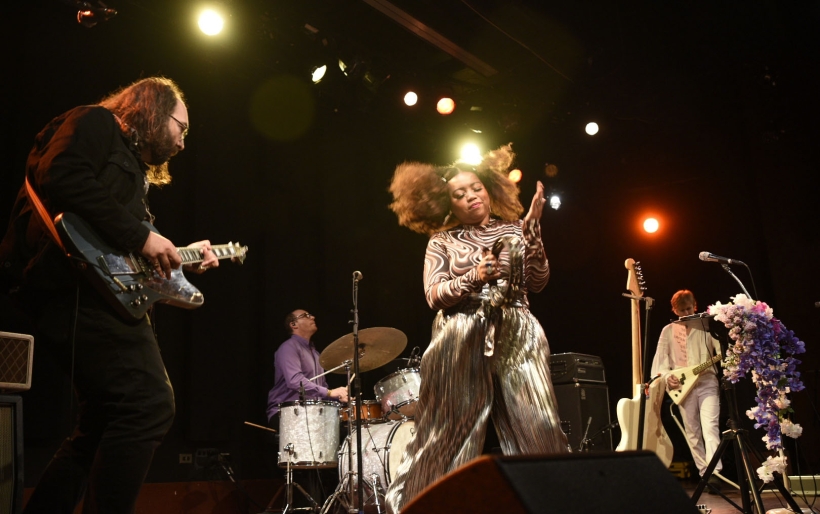 A dynamite Free at Noon performance from Shreveport, Louisiana four-piece Seratones was a little bit of everything and it got the World Cafe Live crowd moving.

Reducing to what Seratones does to a single thing to a single thing would be doing a serious disservice to the Shreveport, Louisiana four-piece. Over the course of a half-hour Free At Noon concert today, the band went from metal riffs to “Funkytown”-esque grooves, psychedelic soundscapes to soul hooks, house beats and beyond. It was a little bit of everything and it got the World Cafe Live crowd moving.

In addition to being a dynamite vocalist, frontperson A.J. Haynes proved to be a charismatic onstage force, shouting out all the educators in the room, quoting Octavia Butler (“The only everlasting truth is change.”) to introduce the driving “Get Free,” dancing and shaking hand percussion on “Gotta Get To Know Ya.”

“I got my church tambo here,” she said. “We’re having a good time.”

The soaring “Good Day” was the set’s high point, with all four Seratones — Travis Stewart on guitar, Adam Davis on bass, and Jesse Gabriel on drums — locking in and helping the room ascend to a higher level. During a breakdown, Haynes sat on the stage’s edge led the crowd through an affirmation — “turn to your neighbor and say ‘I am because we are‘” — before kicking back into the chorus.

Before concluding with the discofied “Two of a Kind,” she Haynes said “We’re gonna get a little Donna Summer in here” and brought the house down by jumping out and dancing in the thick of the crowd.

Seratones’ third LP Love & Algorhythms releases on Friday, April 29th — preorder it here — and they’re back in the region on June 11th and June 12th when they play The Stone Pony in Asbury Park and SteelStacks in Bethelehem with St. Paul and the Broken Bones. Tickets and more information can be found at the XPN Concert Calendar.