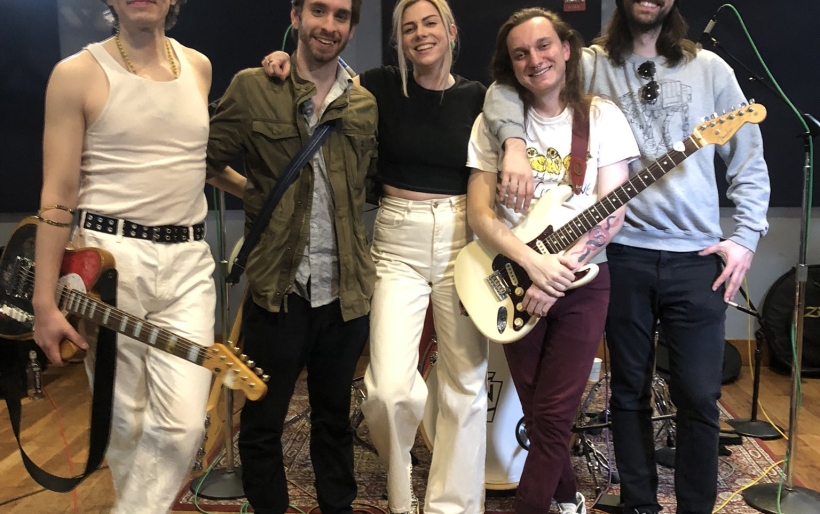 With songs about interpersonal relationships that range from the sweeping to the strained to the downright dysfunctional, Humilitarian doesn’t present a rose-colored view of their world, but their songs are full of hope, as we hear in this performance at WXPN studios.

Every time you listen to Philly five-piece Humilitarian, a new piece of their heady musical DNA will jump out at you. Notes of In Rainbows and Make Yourself; Paramore-esque power screams and dips in the Smashing Pumpkins tone zone; some points trace all the way back to Pink Floyd. But reducing this band to the sum of their parts is a huge disservice; they’re a formidable voice on the Philly scene in their own right, and this week The Key Studio Sessions plays host to their captivating live energy.

Humilitarian caught our ear in early 2020, with the release of their self-titled EP and a West Philly basement gig at the storied Haus of Yarga for the impeccably-curated Reflective Surface concert series. As that spectrum of reference points suggest, there’s no easy box to wedge them in; particularly with their next release, 2021’s Head In A Jar EP, they proved to be a little bit mathy, a little bit jammy, a lot modern rock, and heavy on the psychedelic atmospheres. And they’ve got chemistry; just look at how the band’s dynamic frontperson Kira Cappello locks in with her bandmates — Brendan Clarke and Charlie D’Ardenne on guitar, Tucker Pendelton on bass and Elijah Glovas-Kurtz on drums — in this performance at WXPN studios.

Launching into the set with the hammering “Romantic” from that self-titled EP, the set goes on to showcase three out of four songs from Head in a Jar, including the groove-laden title track, the icy funk of “Don’t Look,” and the cathartic single “She Said.” Presenting vignettes of interpersonal relationships that range from the sweeping to the strained to the downright dysfunctional, Humilitarian doesn’t make music with a rose-colored view of their world; but the dipping and rising energy of their music does offer hope and inspiration to channel your inner strength and get through the day. And this is just the beginning of their journey.

After a busy spring of shows, the band is on something of a self-imposed creative retreat at present, finishing up writing and beginning to record their next batch of new music, which they hope to begin releasing later this year. While we wait for that, get to know Humilitarian in this week’s Key Studio Sessions videos above and below, and keep up with them at @humilitarian_phl on Instagram.