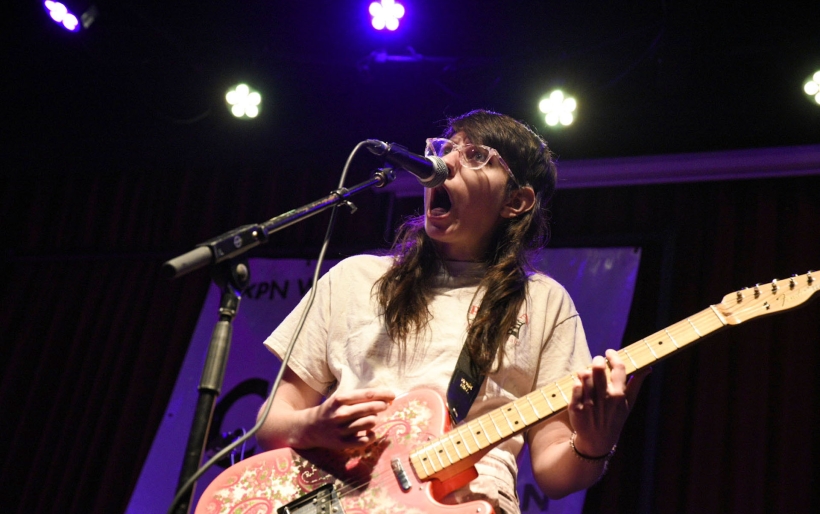 With hard rock riffs and little in the way of breaks between songs, Grace Vonderkuhn left your head spinning.

Grace Vonderkühn shook the Lounge stage at World Cafe Live during day one of the 2022 NON-COMM conference. The post-punk/ garage rock trio based out of Wilmington, DE packed a massive amount of energy into their short set. With little in the way of breaks between songs, their fast-moving performance left your head spinning.

Starting with “Undone” the lead singer and guitarist Grace Koon choked up on her colorful telecaster and began a twinkly guitar intro that slammed you into the pavement when it broke into the rest of the song. The energy was unmatched and before you could catch your breath they began “Into The Morning,” which felt right at home in the sounds of Philly DIY music. Drummer Dave McGrory was a monster on the kit, no drum or cymbal was left untouched. His tasteful yet chaotic fills gave the trio a filled out sound.

Personifying the feeling of a grimey basement show, “Put it on Me” brought classic rock-style chugging on the guitar and bass. The power chord riffs were intense and McGrory switching between slamming the crash and single snare hits never let you settle.

“Rock and Roll Gary,” a homage to the unsung heroes of the music industry, felt right at home at NON-COMM, and its driving tom and snares revved up the engine to start their final song of the set. Featuring backing vocals from McGrory and fantastic bass work from Brian Bartling, who humbly held down the lowend in his corner of the stage, the whole trio locked in on this song, driving to the finale where we could all catch our breaths. Grace Vonderkühn came out swinging this evening, they left it all out on the stage…and by the end of their set McGrory looked like he had just ran a marathon.

Check out their latest album Pleasure / Pain, out now Sheer Luck Records, and listen to their performance below. For more, follow Grace Vonderkuhn on Instagram.