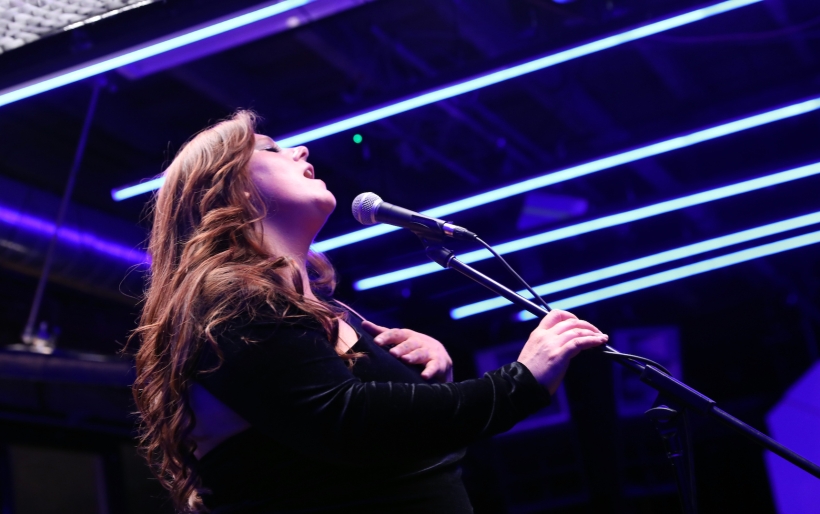 On her debut album, Suzanne Sheer is flexing all components of her craft to date, delivering a take on R&B that’s classic and classy as well as futuristic and adventurous.

It’s been an unpredictable journey for Philly singer-songwriter Suzanne Sheer, from the first time we caught her live set at the jazz-centric Francisville restaurant Green Soul, to a pop-leaning summertime performance at a Chill Moody showcase of women in Philly music. With her debut album The Blue Hour due out on June 10th via the Cake Productions label, Sheer is flexing all components of her craft to date, delivering a take on R&B that’s classic and classy as well as futuristic and adventurous. Last week, for a packed room at Warehouse on Watts, Sheer and an ensemble of collaborators played the new music in a live setting for the first time.

The seven-piece band was comprised of production collaborators and music directors 3xpo and Lotits, the former acting as the house DJ and the latter adding a sparkling electric guitar accompaniment to the yearning “Desire.” A trio of background vocalists stood on one riser at stage right — Elle Morris, Destiny X, and Cake Productions partner and WOW general manager Meg Bassett — while cellist Dan Kassel and violinist Chris Smirnov delivered string accompaniment at stage left.

Despite their numbers and array of skills, the band’s accompaniment leaned towards subtlety and nuance — the vocalists knowing when to harmonize and when to sit back, the string section offering breathless accents at key moments and resting for extended stretches otherwise, Lotits only joining the band for one song and enjoying the show from sidestage otherwise. The focus of the evening, whether from behind the keyboard or up front at the microphone, was Sheer and her commanding voice — and even she worked strongly in restraint. 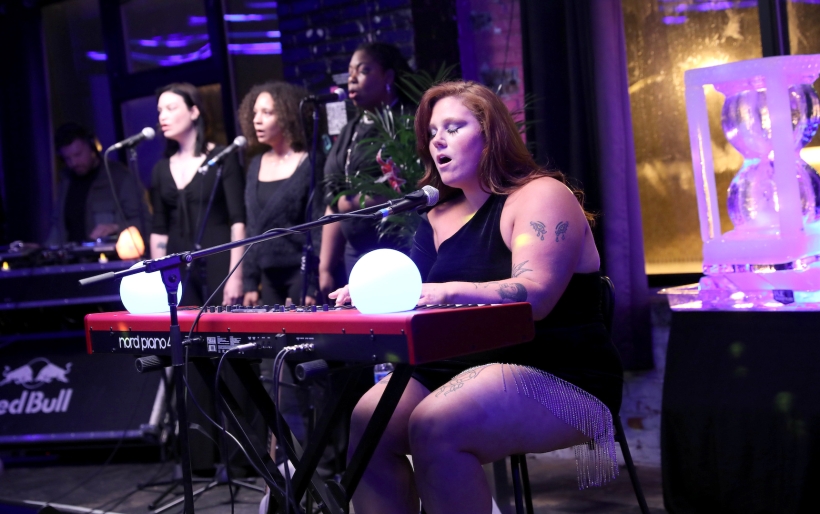 Beginning with the delicate piano of “Story” and its soulful, Amy Winehouse-esque retro/contempo aesthetic, Sheer showed that her power as a vocalist is the extreme control she exhibits over her instrument. Similar to the subtlety of her band, Sheer is not all up in your face with runs — though she does runs, hauntingly — or arresting belts — though she confidently gets loud when needed. Sheer understands that sometimes the biggest emotional impact comes with breathless quiet, knowing when not to sing out, and the initial moments of the set focused on this. And then the “Blue Ruin” beat dropped, hitting an experimental trap zone somewhere between Metro Boomin and Bjork, and we were off to outer-space.

The SZA-esque contemplation of “Drive” made a sublime impression, with a choppy underwater rhythm and angelic vocals from the choir soundtracking Sheer’s account of a late-night road trip to clear one’s mind; she swayed and gestured theatrically at the mic, but mostly seemed lost in the feeling of the song, bringing the room along with her. As the set wound down, most of the band peeled away on the moving “For Love,” which Sheer returned to the piano to play with just Kassel and Smirnov accompanying.

Tonight, @SuzanneSheer previewed her new LP The Blue Hour for an intimate crowd at @wowphilly and we feel v fortunate to have been in attendance. It was a vibey mix of classic R&B / soul power with futuristic electronic beats; here she is playing her new single “Down For You.” ✨ pic.twitter.com/nJK02RgWfF

And before the night wound down with her punchy new single “Down For You,” Sheer paused to extend her massive gratitude to her team — particularly Lotits and 3xpo. “I came here and started recording this album at a time I felt so disconnected from myself and my music,” she said. “And these two guys completely gave me back my spirit. We had the most special time making this album.”

To conclude the event, Sheer directed everyone to a screen hung from the south wall of the venue; on it, she projected the music video for The Blue Room‘s next single, “Girls on the Internet,” due out in a couple weeks — it’s a quick send-up of social media, the societal pressure it contributes to, and the divisions it can cause in real-life relationships. Keep an eye out on Sheer’s IG for updates on its release, and pre-save The Blue Hourhere.