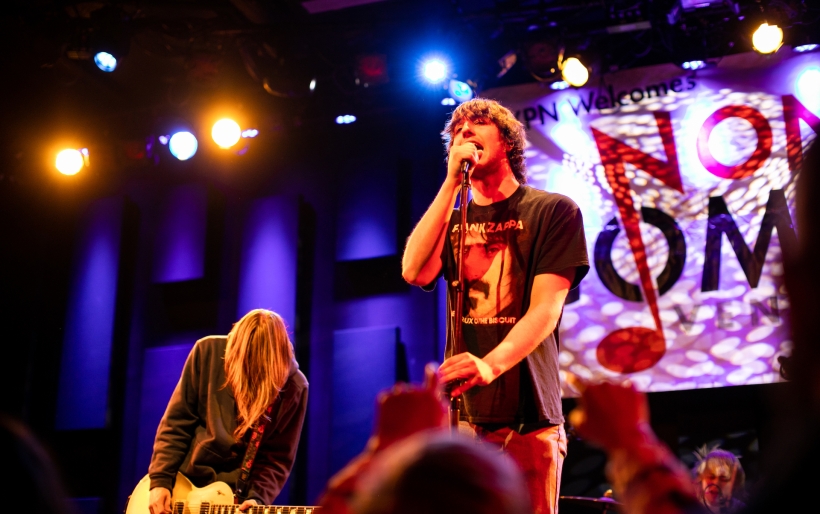 Geese’s chaotic, compelling set closes out day one of #NONCOMM

It was hard to take your eyes off New York City’s latest indie rock export, Geese, during their closing set at NON-COMM’s first day.

Headlining day one of NON-COMM, buzzing Brooklyn band Geese brought the night to an end with an unhinged performance on World Cafe Live’s Music Hall stage. Clad in a Frank Zappa t-shirt, lead singer Cameron Winter paced the stage as the rest of Geese went into their first tune — labeled “Untitled XLC” on their scribbled setlist. The chaotic nature of the music is reflected in the look of the band; long hair, goofy demeanors, and low-hanging instruments.

Winter hopped on the piano for the explosive ballad “Untitled Hot” — another working title from their handwritten setlist — which brought the energy down before they shot it right back up; his voice was soulful and you could hear a blues influence in his inflection. Heading into “Disco,” Winter and Hudson joined each other on the piano to play a little riff before they launch into the song, which descended into a slow-slogging discord of slammed keys.

Throughout the night it was hard to take your eyes off of the band. If Winter was not singing, Bassin was wailing on the drums, or Hudson was pushing the limits to how low you can hang your guitar while still playing. Their goofy college-aged dude charm shone through, and seeing them have fun influenced the crowd to join in. In usual rock show fashion, they ended their set with a massive build up on one chord. During this, Hudson ran back to the drum set and jumped on Bassin, putting him in a choke hold. Continuing to play, Bassin closed out the song and walked off stage with Hudson on his back — a fitting end for such a wild performance.

Listen to the set below; Geese’s album Projector is out now and this September they perform at the XPoNential Music Festival.