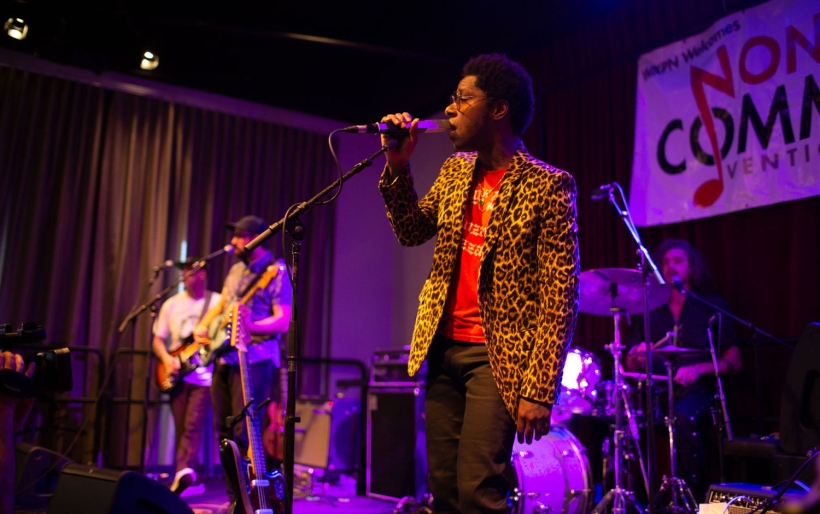 The Atlanta singer-songwriter took his favorite elements from a spectrum of genres and made them his own, winning over this NON-COMM crowd.

Curtis Harding describes his music as “slop ‘n’ soul” — a blend of the blues, psychedelia, R&B, and synthesizer pop that gives his music a truly unique sound. The Atlanta native had an upbringing surrounded by music. His mother Dorothy Harding was a gospel singer and Curtis would occasionally join her on stage to sing. Curtis would go on to be a part of CeeLo Green’s backing band in the 2000’s and form the garage rock band Night Sun with members of Black Lips.

“Hopeful,” from Harding’s latest LP If Words Were Flowers, kicked off his set set. This jazzy and powerful protest song was a great introduction to Harding’s brand of the blues. During a mysterious saxophone solo section, Stuart Bogie carried us right into a wild synth solo, modulating up and giving the song the hopeful feeling he sang about.

The gritty bass tone and the simple drum groove made the next song, “Can’t Hide It,” sound like some sort of Tame Impala cover of “All Along the Watchtower” in the best way possible. Paired with Harding’s 70s-style funk vocals, the crowd couldn’t help but dance along. The sultry love song “I Won’t Let You Down” brought us back down to earth until Harding treated the audience to “On and On,” another danceable 70s funk track, which was followed up by the equally energetic  “Need Your Love”.

Curtis Harding, along with many artists showcased during, NON-COMM bring elements from the past and inject them with new life. What Harding delivered cannot be replaced by putting on a James Brown or BB King record; his music is now, it’s happening, and it’s something to make note of.

Check out his 2021 album If Words Were Flowers, out now on ANTI- Records, and see photos from his set below.