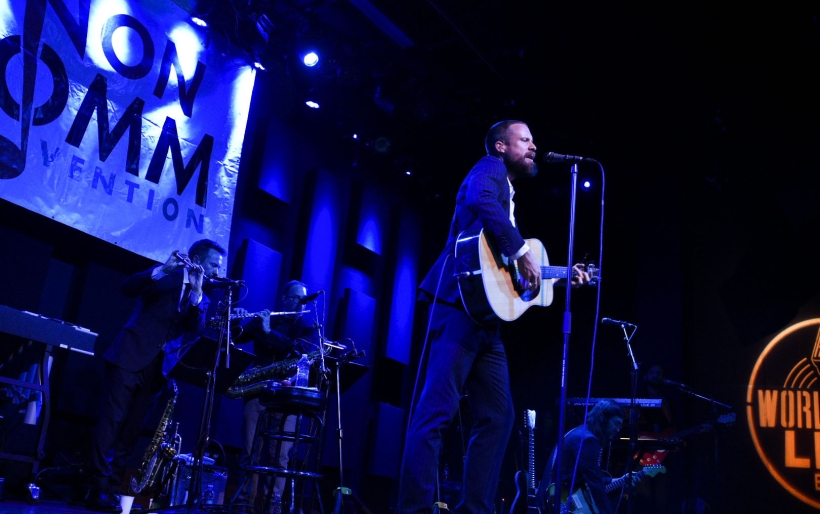 Father John Misty performed songs from his new LP Chloë and the Next 20th Century to close out Wednesday’s NONCOMM sets.

Father John Misty played an expansive set for an intimate crowd, closing an exciting evening of performances at NONCOMM this Wednesday. The Los Angeles artist traveled far for this opportunity to present new music to the AAA radio circuit, and expressed his gratitude to the crowd. “I’m just happy to be out of the house,” he said. “This next one’s about two minutes too long, which is great for radio, so thanks for taking a chance on me.”

“I went crazy during lockdown just like all of us. I lost my damn mind,” Josh Tillman told the crowd. He was explaining the new tone of his recently released LP, Chloë and the Next 20th Century, which takes a turn into old Hollywood gilded glamor. Half the songs he played with his full band, which composed a horn section and an electric upright bassist among others, were from Chloë, and the rest were evenly split between his older discography.

Father John, AKA Josh Tillman, brought his unwavering swagger to the stage, and glided around the stage in his velvet loafers. Crowd favorites included “Hollywood Forever Cemetery Sings,” a tune from 2012’s jangly lament Fear Fun, and the self-titled song from 2015’s aching love odyssey I Love You, Honeybear.

Changing from acoustic to electric to working the mic stand, Father John Misty gave a memorable cabaret performance, one that the XPN audience was especially waiting for. He also made a point to shout out Sharon Van Etten, who had just shared the stage prior. “For all you radio programming folks, I’ve got an insider tip for ya,” he said. “The Sharon Van Etten album is coming out this Friday.”

The new record is Chloë and the Next 20th Century, and is available to stream anywhere. Father John Misty will return to Philadelphia on September 13th for an XPN Welcomes show at The Met Philly; more information can be found at the WXPN Concerts and Events page.