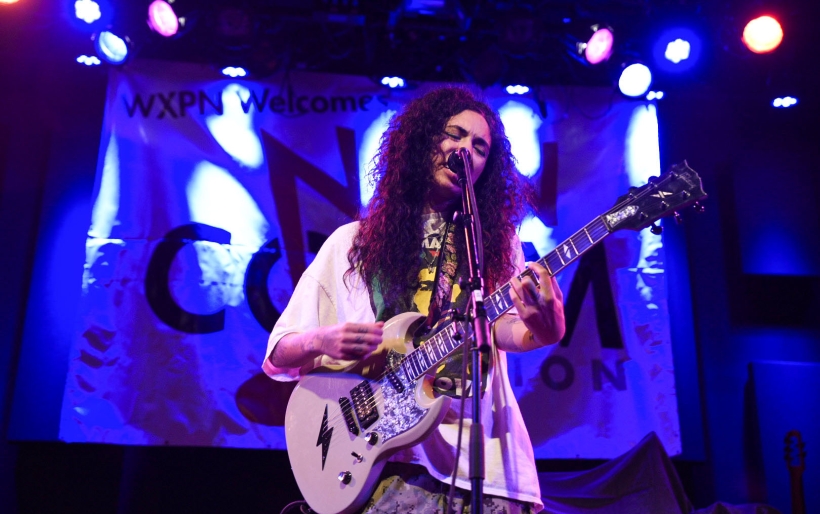 Asheville songwriter Indigo De Souza and her four-piece band showcased her wonderful sophomore album Any Shape You Take and more at #NONCOMM.

The Asheville songwriter and her four-piece band pulled out three tracks from the album Wednesday night – plus two from her self-released debut I Love My Mom – in a set with less pop sheen than classic rock buzz. As usual, De Souza’s voice was central, sometimes gruff and othertimes soaring to a keen soprano, as when she cries, “I’ll never be the only thing you love,” on “Way Out,” and even a country croon on “What Are We Gonna Do Now.” The band’s tight, sinewy drum and bass grooves I expected, but their gorgeous trio harmonies were a great surprise. The arrangements were impressively sparse, as De Souza plucked one guitar string for almost all of “Darker Than Death,” and set the ax down altogether for “Hold U,” hands down one of my favorite songs of 2021.

A rep from KEXP Seattle introduced the band and highly praised the live video they recorded for KEXP in March, linked below along with photos from their NONCOMM set. De Souza had to postpone her May 2nd show at Union Transfer with Horse Jumper of Love and Philadelphia’s Friendship due to COVID cases in the bands, so keep watch for a new date to be announced soon. Online they shared, “We are sad to miss this show. It’s a sensitive time to be playing music. Thank you for bearing with us as we learn how to navigate it all. Sending love in all directions.”