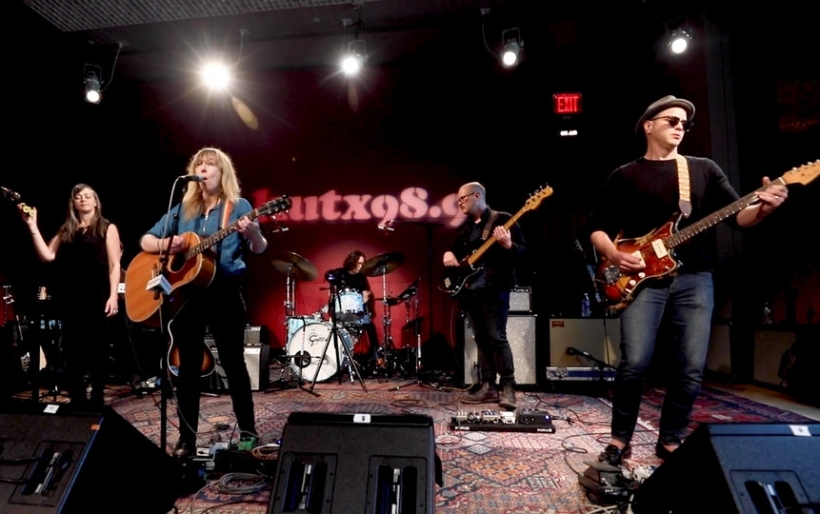 ObSessions: Must-see in-studio videos from the month of April

Imagine a performance from your favorite musician right in your living room, a show performed only for you and your closest friends. It’s just that kind of intimate access that the best in-studio sessions are able to achieve. Ever Since COVID-19 these types of videos have become more essential than ever, helping to fill the void of live music while allowing musicians to share their work in a personal setting. Each month we at WXPN will bring you some of the best in-studio sessions from around the web.

April showers are one thing but this spring has seen an absolute deluge of new music, highly-anticipated tour announcements, and, of course, an impressive collection of in-studio performances. We are excited to bring you some of the best we saw in April as we span the globe from Paris, France to Seattle, Washington and everywhere in between (including right here in Philly). This is an eclectic group, to be sure, but what each have in common is a commitment to both penetrating vulnerability and impeccable craftsmanship, putting on full display just what makes them such impressive musicians. You may be more familiar with some of these artists than others, but I promise each is worth checking out. Enjoy!

Indigo De Souza has a lot to recommend, her new live on KEXP set one more impressive moment in a year-plus stuffed with them. De Souza released her second album back in August of 2021, a genre-blasting foray into all sides of the indie rock canon, from its grungier ends to its more polished hooky corners. “Kill Me” is a highlight among an album of highlights and, in this writer’s opinion, one of the best songs of last year. On top of De Souza’s success as a recording artist, the Asheville-based musician has been lauded for her power as a live performer, cutting her teeth at venues big and small all around the US. She brings all of that to the performance above, letting the slow burn of “Kill Me” sizzle right till the moment it bursts into flames, the moment we all get seared.

XPN fans are likely familiar with the Cincinnati heartland-rockers Heartless Bastards who, back in October of last year, played the first Free At Noon  after nearly two year break from the weekly showcase. Here we see them performing a whole host of songs off their 2021 album A Beautiful Life live at Austin’s 98.9 KUTX station. As evidenced above, songwriter Erika Wennerstrom and company are nothing if not consummate professionals, able to bring just the right energy to this intimate performance.

You might not be familiar with Pittsburgh-based folk rockers String Machine which, in a way, is where Audiotree Live comes in. Where outlets like NPR’s Tiny Desk and Live on KEXP tend to highlight more established artists, Chicago’s Audiotree Live is focused more on discovery. So allow me to aid in your discovery of String Machine, a seven-piece band who released their third record Hallelujah Hell Yeah this February on Philadelphia label Know Hope Records. Hooky and expansive, String Machine find a middle ground between Neutral Milk Hotel’s eccentric folk and Arcade Fire’s unabashed grandeur, something on full display during their performance above.

South Florida rapper Denzel Curry is not an artist that has made many studio session appearances but you get the sense Curry can captivate any stage he might find himself on, whether that be The Met back in 2019 or the video above, which finds him performing for Live on KEXP. Here we see Curry perform “Walkin”, a standout track from his most recent LP, Melt My Eyez See Your Future. What starts out as a relaxed and deliberate performance turns on a dime, as Curry implores his partner, DJ Bradley Chatman, to “turn that s%&# up”. What results is the kind of Soundcloud, trap rap that has largely been Curry’s calling card. His expertise in this oeuvre is easy to see here but so too is his ability to shift gears, something he does throughout Melt My Eyez See Your Future (and the rest of this KEXP set).

Perhaps it is appropriate that mxmtoon be featured here, given the fact that much of her notoriety as a performer and musician can be traced back to YouTube itself, where she first arrived as a viral sensation back in 2018. While the idea of a YouTube star might come with certain connotations, the video here, featuring mxmtoon performing her latest single “mona lisa” as she walks through the Île Saint-Louis in Paris, puts any worry to rest. The beauty of the kind of stripped-back performance we get here, featuring just vocals and light ukulele strumming, is that we get to see an artist unadorned, with really no where to hide. What emerges is a soft, lilting vocalist you can’t help but charm.

I would be remiss if I didn’t take a second to highlight some of the excellent work we do right here at WXPN with The Key Studio Sessions. Here the crew captures local rockers Echo Kid fresh off the release of their new LP Fever Dream which came out April 22. “I Try” is the standout of that session, a wonderfully meandering dip into sunny classic rock with hooks aplenty. If you like what you see here, you can catch Echo Kid live right here in Philly this Saturday at PhilaMOCA.