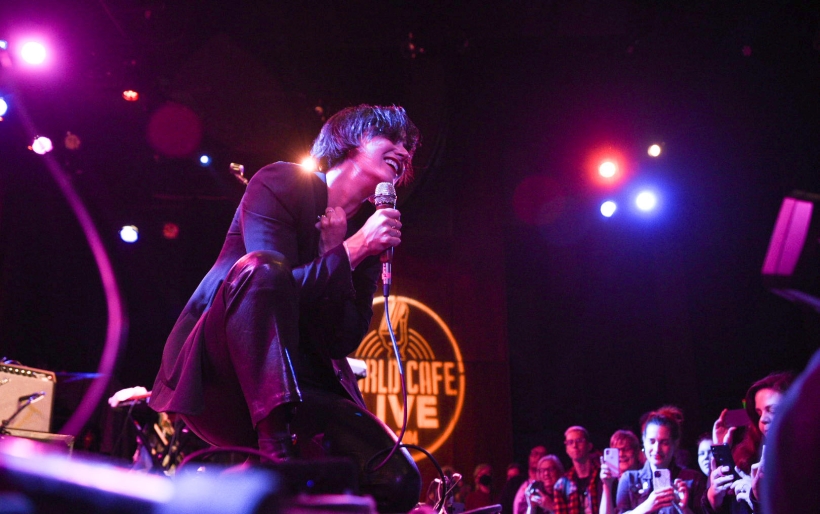 Ever since her earliest records, Van Etten has shown the power in restraint, resisting a full boil until the moment is perfect.

“Well she really set the bar high,” said one audience member moments before Sharon Van Etten took the World Cafe Live stage on Wednesday. The “she” they were referring to was the legendary Cheryl Waters of Seattle’s KEXP, whose gushing introduction before Van Etten’s set did, indeed, set a high mark. To the surprise of few in the audience, Van Etten and her band cleared the bar with ease, hurtling through an impressive set of almost exclusively new material. If this set is any indication of We’ve Been Going About This All Wrong, the record Van Etten is set to release this Friday, we are surely in for a treat.

NON-COMM week is a tour-de-force of shows, concert after concert with very little time to catch one’s breath. The shows, abbreviated and frantic, require an impressive amount of command and Van Etten is an expert in this regard.  Much of her music lives in the moment before the boil, the time when the water slowly heats, her sultry voice the steam beginning to escape. Ever since her earliest records, Van Etten has shown the power in restraint, resisting a full boil until the moment is perfect. The night first began to simmer, though, when Van Etten unveiled her newest song – the synthy, propulsive “Come Back” – for the excited World Cafe Live audience.

From there, Van Etten had the crowd in the palm of her hand, moving about the stage with intensity and precision.  Van Etten impressed with her new songs, but ending with “Seventeen,” a hit off her 2019 LP Remind Me Tomorrow was the finishing touch the set needed. It was here that Van Etten finally let things loose, blowing the lid off the night once and for all. She even found a way to bring things full circle, finding Waters in the crowd and singing while staring directly into her eyes. I don’t know how much higher Waters can set the bar next time around, but I wouldn’t bet against Van Etten hopping right on over.

We’ve Been Going About This All Wrong is out Friday via Jagjaguwar, and Sharon Van Etten heads out on the Wild Hearts Tour this summer with Angel Olsen and Julien Baker; they’ll play The Mann on August 19th, more information can be found at the Concerts and Events page of XPN.org.