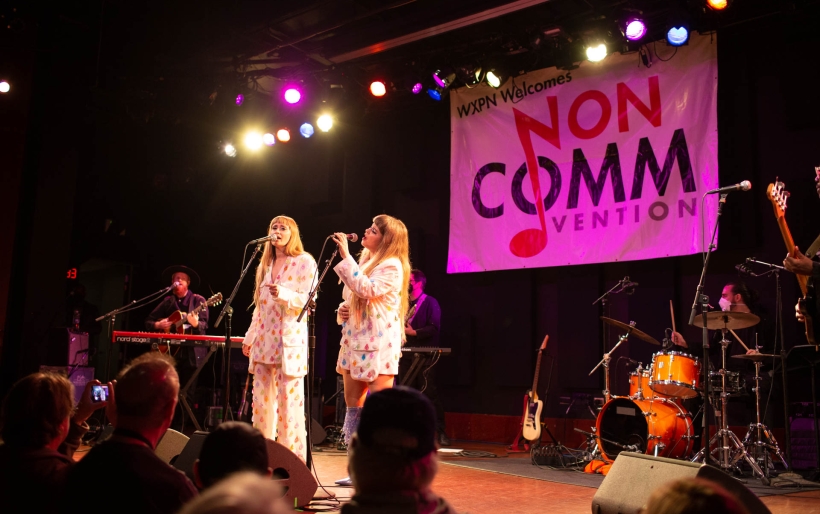 For their NON-COMM closing set, Lucius went bop-for-bop with some heartbreaking ballads in the mix as well.

Back from a six-year hiatus and returning to the World Cafe Live stage, New York City pop / rock outfit Lucius delivered a showcase of their third album Second Nature to close out the 2022 NON-COMMvention.

Co-lead singers Jess Wolfe and Holly Laessig, guitarist Peter Lalish and drummer Dan Molad were joined by bassist-singer Solomon Dorsey and guitarist Alex Pfender for this performance, and the setlist went bop-to-bop on the opening: the incredibly fun disco bop “Next To Normal” right into the upbeat country bop “Promises.”

It was a lively opening that had the midday crowd dancing, but as the band has a full-scale gig tonight at The Wellmont Theatre in Montclair, Laessig told the crowd “We’re not trying to drain the pipes before 7 p.m.” So they went mellow and midtempo on the twangy “Man I’ll Never Find,” and on “Two Of Us” from 2013’s Wildewoman followed a dynamic build from solitary acoustic harmonies to full-band Fleetwood Mac style catharsis.

The new “Heartbursts” brought the beat back with synth-forward 80s pop production, and the band concluded the set with “Turn It Around,” their first big single from nine years ago. Exiting the stage, Laessig said to return this weekend “for the full shebang,” and you can do that at The Wellmont tonight, or at the Theater of Living Arts in Philly tomorrow. Details on both shows can be found at our Concerts and Events page.