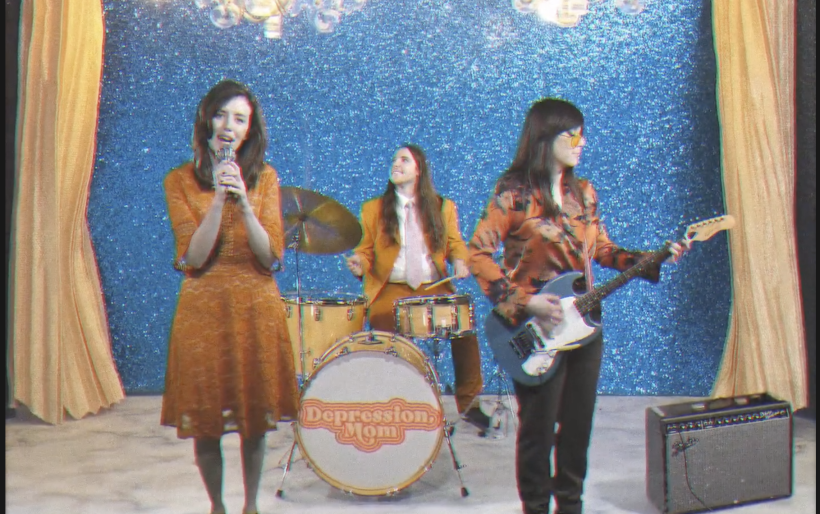 Philadelphia indie rock singer-songwriter Madalean Gauze has returned from a bit of a hiatus with a new band, Depression Mom, and a music video for their debut single is out this week.

“Once In California” is a dreamlike, psychedelic-dipped pop nugget about love and loss, with sonic nods to Nancy Sinatra and The Zombies. In a post on Depression Mom’s Instagram, Madalean writes that the song has been in her notebook for literal decades: “It has been a long time coming. The song ‘Once In California’ is particularly special to me because I wrote the refrain with my sisters when I was 5 years old. I am not sure why, but it became my mission to complete that song during this pandemic.”

The recorded version of Depression Mom finds Madalean joined by her regular bassist Alexis J. Dundovic, as well as drummer Patrick Berkery; for the live band in the “Once In California” music video, Adam Shumski is behind the kit. Directed Amy Frear with DP Shawna Annable, and filmed at Melodyvision in Plymouth Meeting, the video takes its visual cues from television variety shows of the 60s, from the tinsel background and retro attire to the bubbles framing each band member’s face.

The visual is a great representation of Depression Mom’s sound, and Madalean’s IG post continues by thanking producer Nick Krill “for supporting my obsession with the Lawrence Welk Show and Bing Crosby (specifically The Holly&The Ivy/ What Child Is This Medley)-love that song from Bing. So happy we created the phrase ‘Welk Stack’-I will reference that whenever I create new music.”

Watch “Once In California” below and keep an eye on Depression Mom’s Instagram for news of their live debut.