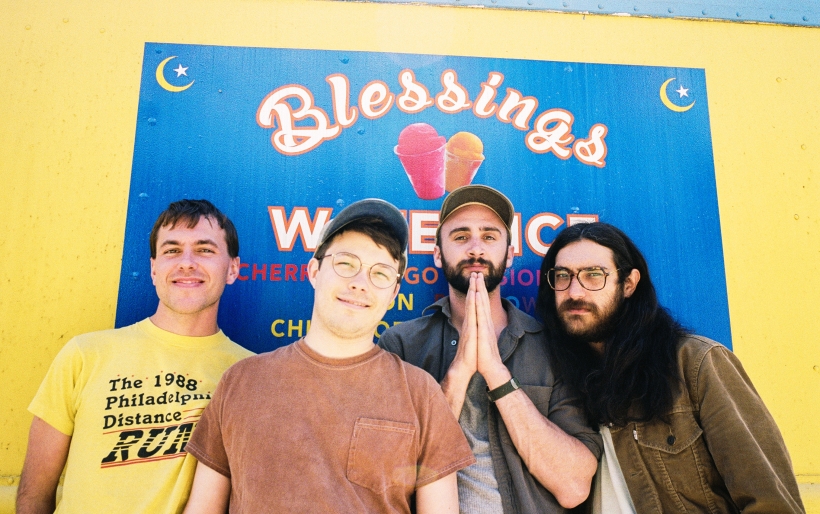 Philadelphia granola-rock four-piece and new signees to Merge Records, Friendship are one month closer to the release of their next LP then when we last checked in with them at XPN. Love The Stranger, co-produced by the band and Bradford Krieger, will be available July 29th to stream or purchase on vinyl. The record’s first single, “Hank,” is out now, with a music video directed by comedian Joe Pera.

Frontperson and poet Dan Wriggins shared in a statement that the leading single is about “when you go to fix something that’s broken and realize the tools you’re supposed to fix it with are also broken.” The music video for “Hank” is cut with scenes from Wriggins’ former home of Little Cranberry Island in Maine, featuring the vocalist rowing a boat out in the ocean where he used to work as a lobster fisherman, and scenes of friend Henry the carpenter constructing a home and Kaitlyn painting the rocky landscape. The foggy, pine tree-lined coast serves as a fitting backdrop to Wiggins’ plain spoken lyrics and the slow building guitar line that culminates with a distinct buzz created by “the sound of a shoddy Craigslist guitar from Woonsocket, RI getting chainsawed in two.”

Joe Pera, host of Adult Swim’s Joe Pera Talks With You, became interested in joining the band’s creative vision soon after hearing the unreleased record for the first time. “As soon as I finished listening, I asked if I could possibly direct a video for it,” says the comedian. He added, “Me and Friendship are hoping it will get a million views on YouTube and lead to a collaboration with Shakira.”