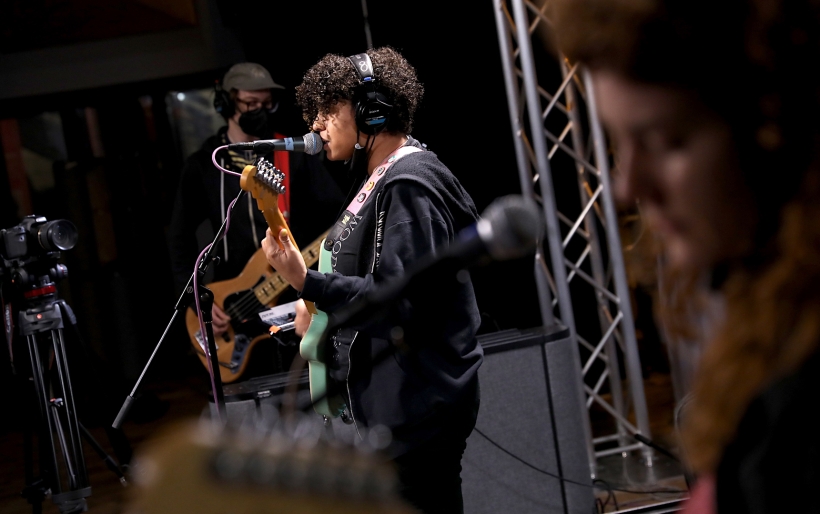 Joining us in the studio for this Indie Rock Hit Parade live session is a group that has spent most of the first part of 2022 on the road. Oceanator is the project of New York singer/guitarist Elise Okusami, who released her second album, Nothing’s Ever Fine, earlier this year. Co-produced by XPN Artist to Watch Bartees Strange (and featuring guest appearances by Jeff Rosenstock and… the ‘Brood X’ colony of cicadas), the album is a fierce levelling up from the sounds of their already stellar debut. As you might expect, the new songs really come alive in a live setting. While on tour with label-mates Pedro the Lion, Oceanator stopped by our studio to tear through a set of new material.

The band wastes no time getting whipped into a frenzy on the nostalgic “The Last Summer.” A graceful baritone guitar transition seamlessly links album highlights “Nightmare Machine” and “Solar Flares.” Our session closes with a tremendous run-through of “Stuck,” the record’s thunderous single.

Watch (and listen to) Oceanator’s Indie Rock Hit Parade session below, and check out some photos from the studio. If you happen to be on the West Coast, Elise just kicked off a string of solo dates supporting Laura Jane Grace, Anthony Green, and Tim Kasher on the final leg of their Carousel Tour.