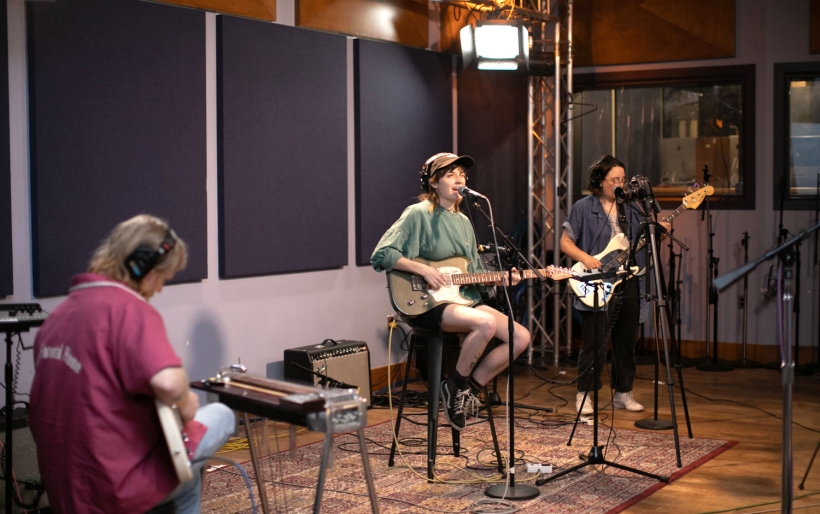 Philadelphia’s Sadurn can draw you in from all directions. There’s the vulnerable lyricism of singer-songwriter and frontperson G DeGroot, and the delicate vocal harmonies they share with bassist Tabitha Ahnert. There’s the band’s arresting indie-folk minimalism, anchored by drummer Amelia Swain and occasionally broken in the best way by Jon Cox’s rustic flourishes of pedal steel and baritone guitar. There’s Sadurn’s sublime debut record Radiator, out now on Run For Cover Records and filled with intimate, moving and ultimately relatable story-songs, vignettes of personal moments that transcend the specifics of their words.

Sadurn’s early singles and split releases have captivated us for a minute here at WXPN. More than that, even, as G reminded me while setting up for this Key Studio Session that back in 2017 I wrote about the first music they ever put out — the Friends With Your Friends EP, released under the name Veev — for the Items Tagged Philadelphia series. But something about Radiator feels like an arrival, a record that will accelerate this band’s journey from basements to clubs and hopefully beyond; we saw that process begin last week when they packed the room at Johnny Brenda’s for their album release party. And some songs they’ve had with them the whole time: “The Void / Madison,” which opens the band’s Key Studio Session, is a selection from Friends that was re-recorded for Radiator.

There are reference points all over the map in Sadurn’s moving music: Neil Young and Jason Molia, Big Thief and Shannen Moser (the latter of whom the band shared two bills with already in 2022, and who Ahnert told the audiences they and DeGroot would cover when they first started playing together). There are reference points on the literal map as well: album standouts “Icepick” and “Snake” place you in various east coast settings like Massachusetts, State College, Assateague Island, and right here in Philly on a tour through desire, loss, separation, distance, and ultimately hope: when DeGroot sings “my idea of love is that it’s lasting” on Snake, you’ll feel it in your bones.

Sadurn has a handful of tour dates in June, followed by a mid-summer run of shows opening for Hop Along, as well as a tour with Horse Jumper of Love; their next Philly gig is August 13th at the Ukie Club with Horse Jumper of Love and Babehoven, followed by a show Saturday, November 19th at Union Transfer, opening for Alex G. They’ll also play Millersville’s Phantom Power on July 26th with Hop Along. Get tickets and info on all those shows at the XPN Concert Calendar, get Radiatorat Bandcamp, read their recent interview with WXPN’s Sean Fennell and watch Sadurn’s Key Studio Session videos above and below.