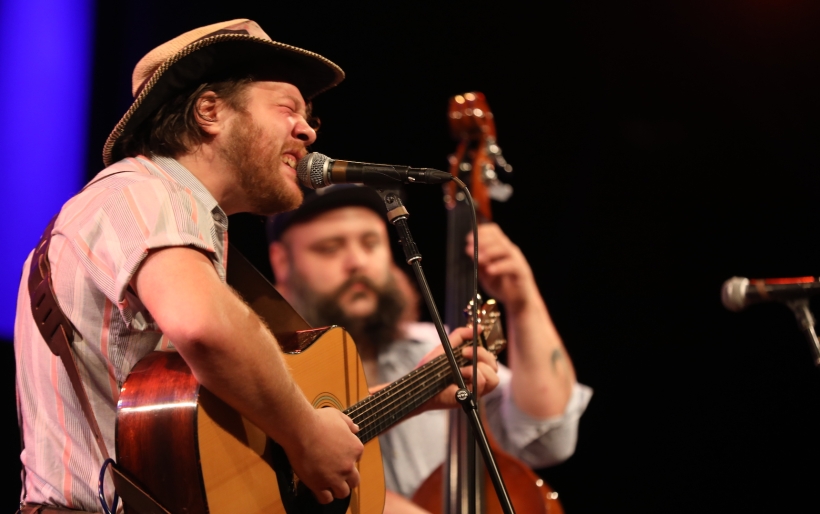 The Alabama singer-songwriter played in duo configuration, but brought a band’s worth of energy, at World Cafe Live this week.

With a quick remark about whether Philadelphia had tumbleweeds and how they are going extinct, the duo played the upbeat square danceable song “Tumbleweed.” The classic country feel showcased the commitment to the craft of roots music. James’ voice on this track and during the whole set was wonderful, the twang in his voice could be categorized as a slightly more palatable Bob Dylan like timbre.

The limitations of two acoustic instruments did not hold the music back at all. James told the Free at Noon Audience how the TSA took his fuzz pedal while traveling and how the next song was “probably not meant to be played acoustic”…but his ability to control dynamics gave “Harder to Blame” a great feel.

Without harping too much on the duo’s ability to create highs and lows, it is very refreshing to watch an acoustic country set that is not just slamming down open chords. James’ playing is very much intentional and his style is a mix of classic country “chicken pickin” and more jazzy melodic lines. Some may classify this as “cosmic country” — something akin to mid-70s Grateful Dead – but putting James into a box is a disservice to him . This shined on their performance of “Racing To A Red Light,” Marmolejo’s funky bass riff and James off-kilter fills brought their diverse range of styles to the front.

They finished the set off with “Dig To China,” on which James played some great slide guitar which ended the performance on an energetic high note. They talked about their plans to explore the city and the mountain of cheese steak recommendations they received which was only added to by the audience shouting their favorites. “Just think of your favorite cheesesteak place and that’s the one we’re going to,” said Marmolejo.

Check out a gallery of photos from the set below. Strange Time to Be Alive is out August 19th on Easy Eye Sound, and can be ordered here.