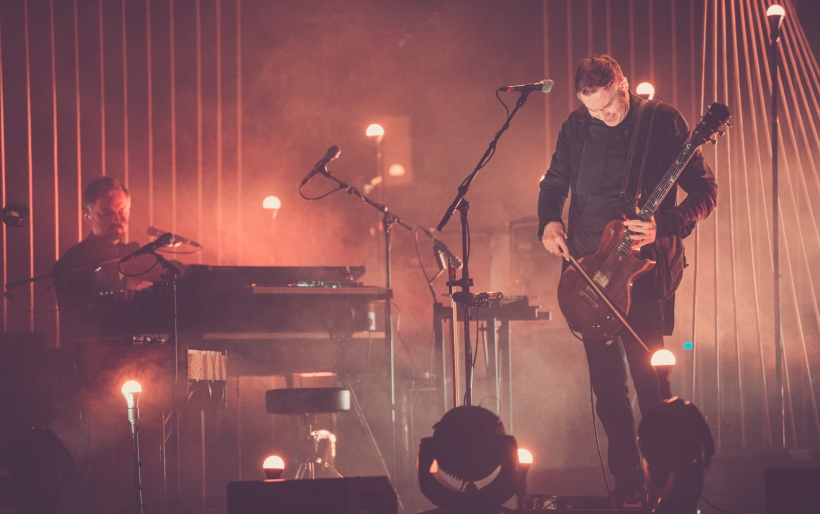 Sigur Ros makes a majestic return to Philly at The Met

A stripped-down version of the Icelandic post-rock band delivered a nonetheless massive set in Philly this week.

The music of Sigur Ros is much like their country of origin: fragile and beautiful, with jarring moments of bombast and fireworks.  After a five-year absence, they returned to Philly last night for a massive, best of the best two-and-a-half-hour set at The Met.

Thye opened with the tinkling minimalism of “Vaka” (from Hvarf-Heim) and ended with the thunder of “Popplagið” (from Takk) and seemed to play every favorite in-between. The lighting was astounding and unpredictable as the music, and the visuals that played in the background created a meditative flow that helped tell a story that few of us could from the lyrics (all in Icelandic, or their own language called Hopelandic).

Anyone with even a passing experience of Sigur Ros can attest to the fact that nothing sounds like them. It is an elemental sound that has swatches of post-rock, prog, Radiohead and Icelandic folk, but is really none of these things. It is a strange singularity of emotion and nature. Perhaps the (translated) lyrics of their song “Hoppípolla” are as close as anything: “Smiling / Spinning round and round / Holding hands / The whole world a blur / But you are standing / Soaked / Completely drenched / No rubber boots / Running inside us / Want to erupt from a shell”

By the end, the crowd was on their feet as Jonsi raged across the stage like a feral cat, howling and raging, and even a mic stand flying into the crowd as they closed with “Kveikur” and their traditional closer “Popplagið.”

It was like nothing I had ever seen before, even after four other Sigur Ros shows. It was spirit and energy that make you feel something, even if you don’t understand a word of it.