It Was Never A Game: Balmour chats about the lessons of love and 'Double HP' - WXPN 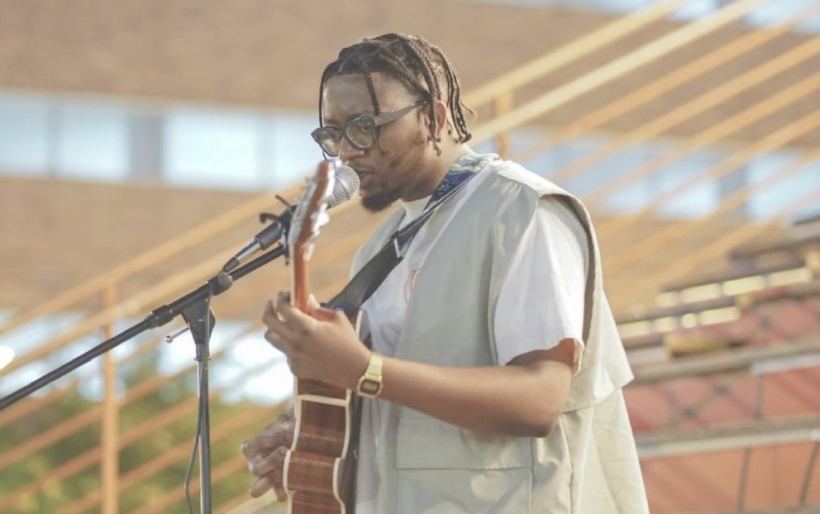 Balmour | photo courtesy of the artist

It Was Never A Game: Balmour chats about the lessons of love and ‘Double HP’

The Philly R&B singer-songwriter returns with a conceptual project about video games, relationships, and everything in between.

It’s been four years since WXPN discovered who Balmour was. Back then, like most of his peers, you could easily catch the Yeadon singer performing at different open mics and possibly rocking out with his Emotae bandmates. It was also the moment he released his debut project Unplugged, a six-track EP that showed he and his younger brother Dan Goode had promising skills as songwriters. Then 2020 happened, and like most local artists, the uncertainty of knowing if they would be able to perform live again put a temporary hold on Balmour musically. That is until “Align” dropped, which would eventually become the first single off his sophomore project Double HP.

Balmour wanted to show who he was an artist on his own, without completely relying on the assistance of his brother’s production and writing. For Balmour, Double HP was a way to show his growth over soulful hip-hop beats that he found on YouTube. In 2020 he tested the waters with “Align” to see if he had something that would catch Philly’s ear. Safe to say it worked: many folks enjoyed Balmour’s new tune, including local Philly hip hop veteran Chill Moody, who was someone he grew up listening to in high school.

The other part of Double HP that showed Balmour’s growth was his willingness to collaborate with his peers, something that wasn’t done on his debut. With the assistance of acts such as Hunny, Friendzone Freddy, TwizzMatic, Shawn Smith, Chill Moody, Ugly Stephen, and even his own daughter, Balmour was able to put a cohesive album about how love is an unwinnable game due to its characters being hurt people who hurt people — but hopefully, who learn lessons along the way.

Two months after its release in April, I was able to sit down with Balmour and talk about a variety of topics such as his grow over the past four years, collaborating with his peers, and the lessons of love he would give his seven-year-old daughter, who also happened to make an appearance on the album. Listen to our interview in full and read highlights from the conversation below.

…on his growth from project to project.

Unplugged was recorded in my bedroom almost in its totality. I ran the same play for Double HP but I did it in I want to say a more seasoned way. We gathered so much muscle memory in just recording yourself over four years, figuring out exactly how you want your voice to sound. Really getting into stacking your vocals just to produce a kind of feel on the record. I think we got really tight with that. I think the only difference between Unplugged and Double HP is time — these are my two babies, I would get the cover art tattooed on my body.

…on forging his own path by connecting with beatmakers online.

My brother has songwriting and vocal credits on a couple tracks. With Double HP, the pivot I wanted to make was to kind of figure out how I wanted Balmour to sound outside of being carried by such beautiful production from Dan Goode. The part that shocks a lot of people is we shopped for a lot of these beats on YouTube. We went on YouTube, bro, and we bought out leases for beats that we were confident in and we purchased some beats that we knew people would like. I just went on a YouTube search bar and typed “SiR-type beat.” When I sit down over my computer and I feel inspiration to create, I definitely know exactly what I’m looking for. The beautiful thing is when you’re picking beats off YouTube, especially when you’re making a tape that spans…two and a half years, being able to create a body of work that sounds cohesive when you didn’t tailor any of the sound to your voice is a blessing. It was not my intention. This would have been a four-track tape at most, but when I was going through the sequencing of the album, we listened to everything, and everything sounded so cohesive when we put it together. I don’t think it was anything I did, I just knew what I wanted at those certain times over the course of two years and it just came together.

…on the video game concept of Double HP.

I think the story of Double HP for me is like, this is not something you beat, because life is not something you beat. The whole message for me is that it was never a game. And by the time you get to the last track, I think that sits with a lot of people in the way that Justin [Miller from MilkBoy and After Five studios] did the sound design is once you hear that last track that says “it was never a game,” you’re thrown right into another authentic “play-through” of the tape. So while you’re thinking about how it’s not a game, you’re thrown right back into the game, I think with a new lesson when you’re listening to all those tracks.