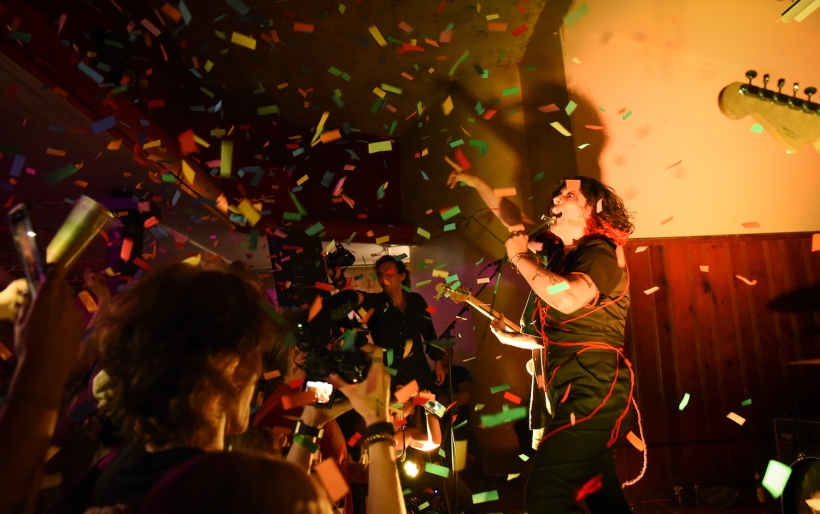 Setting it off with Sweet Pill and friends at Ukie Club

A non-stop 10-song thrill ride, the Where The Heart Is album release party at Ukie Club felt like Sweet Pill grabbed the crowd by the face, reached into their mouths, ripped their heart out and presented back to them this past Thursday night. Only back in the music scene for about 6 months now — but previously active in the early 2000s, where it played host to gigs from 2 Many DJs, Matt Pond PA and more — Ukie Club was chosen by Sweet Pill to debut the full length album that dropped the very same day.The five-piece tore through the album in its entirety with explosive energy matched and almost swallowed by the moshing, stage diving, sweaty and screaming die hard fans.

As the audience members trickled into the Ukie Club (aka the basement bar at the Ukrainian American Citizens’ Association in Northern Liberties) and peered down the pillar-lined dance floor, they could see red yarn tied around the six pillars closest to the stage. And the speakers. And the black barrier on stage behind the drum set. And later, around singer Zayna Youssef’s whole body. It was a fitting set for the fans and the band alike, an homage to the ninth song “Red String.” The crowd hung on every last lyric and Youssef gleefully watched the crowd from stage while trying to catch their breath between songs. 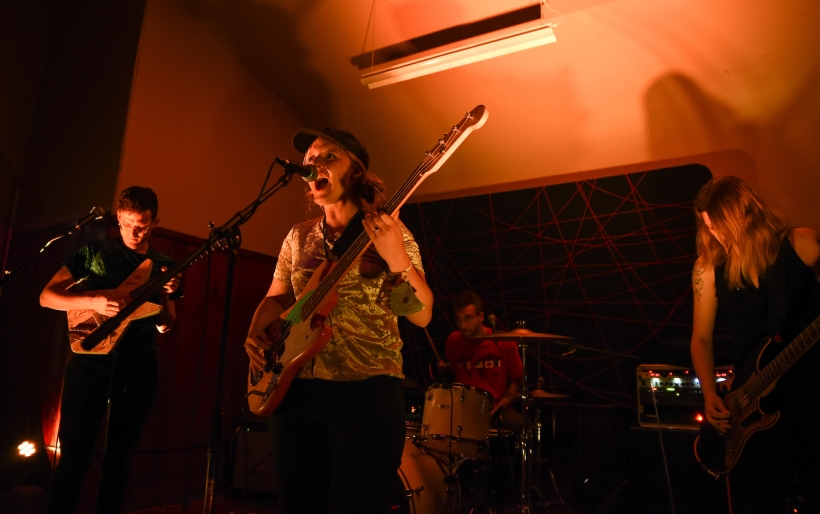 Grocer, Have A Good Season and WHY NOT opened up the night, and apart from playing shows with Sweet Pill in the past, they were also arguably just as big of fans as the crowd. Between songs, singer and guitarist Nic Palermo of Have A Good Season, who later stage dived during Sweet Pill’s set, said it best: “Listen to Sweet Pill on repeat for the rest of your life!”

Each of the openers brought something to the stage. Grocer played a particular song that encapsulates their challenge to fitting nicely into one genre and plastered a smile on the crowds face at the Ukie Club, “Calling Out” off their 2022 release Numbers Game. While Danielle Lovier, Nick Ran and Cody Nelson switched off as vocalist, this track about calling in sick to work featured Lovier along with her jazz informed bass lines, guitarist Emily Daly’s guitar musings and a splash of John Waters-esque artsy playfulness via chicken clucks.

Next, Have a Good Season, a three piece from New Jersey, beckoned the crowd closer for an intimate, melodic and rhythm-driven set, underscored by a sense of longing and lost love. Vocalist / guitarist Nic Palermo, bassist Daniel Stattner and captivating drummer Dan Sakumoto harmoniously played songs like “Sunflower (Yellow)”and “You Don’t Know (How Heavy It Felt)”while the crowd sang a long, many with their eyes tightly shut. WHY NOT hailing from Minneapolis cherry-picked from different ends of their newest, self-titled album in a way that showed how new performing these songs were and in turn how fresh it was for them. Their excited, and possibly a little nervous, energy created an undertow during their performance of “You’re My Kind” and “Same Movie.” They had some deep cut fans in Ukie Club this past Thursday night, someone from the crowd yelled “Play ‘Pink Hat’!” After a quick band meeting, they obliged. 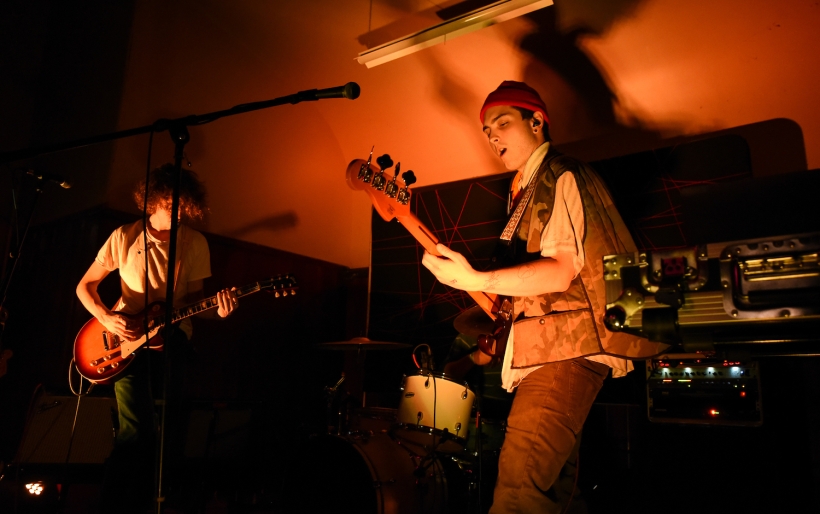 photo by Megan Matuzak for WXPN

“This song makes me clench my ass,” Zayna Youssef said with a chuckle, leading into “Sometimes” at the half way point in both the set and the album. Together, Youssef and guitarist Jayce Williams, drummer / vocalist Chris Kearney, guitarist / vocalist Sean McCall, and bassist / vocalist Ryan Cullen, Sweet Pill visibly enjoyed the revelry of it all, “it” being Where The Heart Is. From moments like handing out confetti poppers to punctuate the first note of “Dog Song,” to crowd surfers getting tangled in the red yarn during “Diamond Eyes,” Sweet Pill’s set felt like an exciting beginning and to be there first hand at Ukie Club Thursday eve was a special celebratory send-off for the five piece embarking on a tour for their debut album.