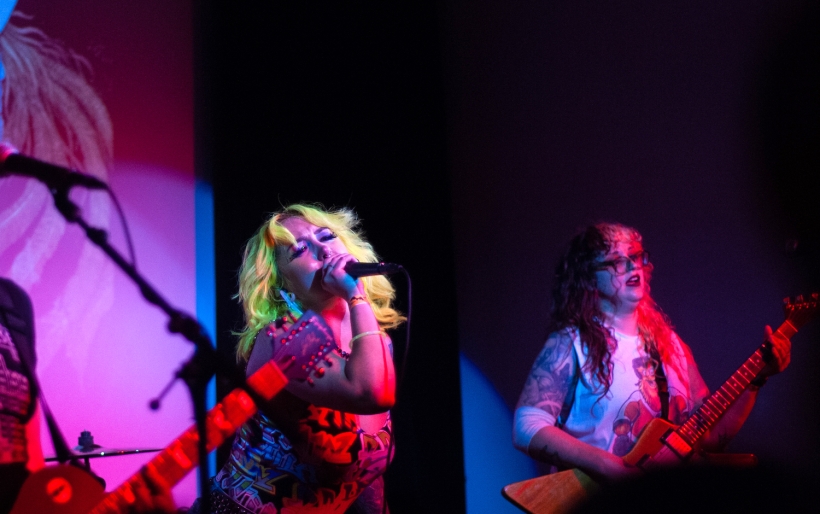 Vixen77 | photo by Will Kirkpatrick for WXPN

The sweltering sounds of the Punknews Summer Soiree

An inside look at the early-July concert bringing a packed bill to PhilaMOCA.

From the moment the show started to the last note, the room was packed, and with the summer heat lingering into the evening, the box that is PhilaMOCA felt like a sauna. But the heat did not snuff out the crowd’s energy, something that was only helped by our gracious host, John Gentile of PunkNews, who stepped out to start the show in a top hat and suit, setting into motion this classy event soundtracked by punk rock. 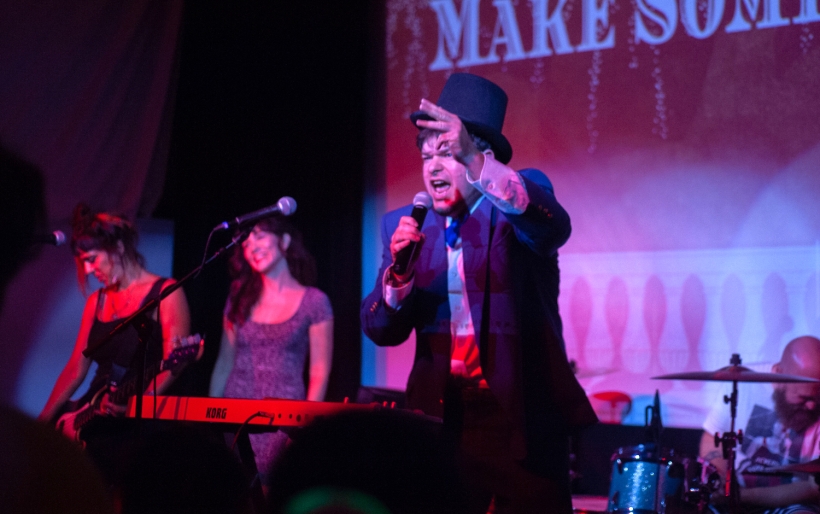 John Gentile of Punknews | photo by Will Kirkpatrick for WXPN

Interlaced through the sets, Gentile graced the crowd with a visit from Punk Santa, who gave out thrifted board games along with special goodie bags as the crowd left. All was hunky dory until a group of Mosh Bots descended on to the floor and caused a hysterical ruckus during the end of DanJoMar’s set. The balloon-filled sky and dancing cardboard boxes put a nice bow to the evening’s event.

In between were the bands themselves. Post-punk gothic rock group At Night was a good way to ramp into the more traditional punk sounds to come later in the night. The group’s dark aesthetic reflected very well in the music, with haunting harmonies and well-executed compositions providing a wonderful introduction to the band. At Night features Nicole Enriquez of Witch Hunt and Julia Gaylord of Callowhill, and as of now they seem to be fairly under the radar – this gig was their one of their first shows – but they are a solid band to look out for in the future. 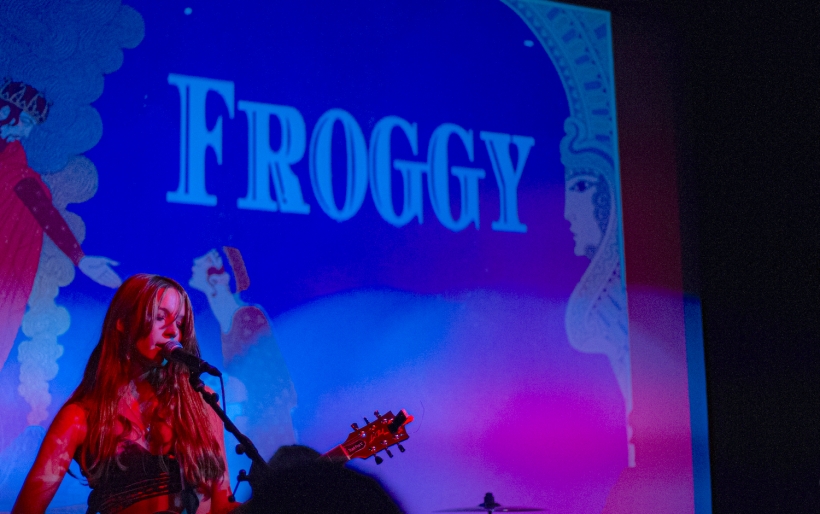 Froggy | photo by Will Kirkpatrick for WXPN

After an impressively short intermission, the young punk trio Froggy hopped on stage. Their youthful energy paired with humorous lyrics has been doing them well over the past year and a half. They have a new album on the way, HARMBURGER, which will be released on August 1. Along with that, their song “7-Eleven Nachos” is featured in the new Kevin Smith movie Clerks III, which releases this September. Their set featured the aforementioned “7-Eleven Nachos” along with their newest single “Stupid Rich Boy.” Fiona Clark held it down on drums throughout the whole night and gave the punky angry energy needed for bassist Brooke Feenie and guitarist Morgan McClain to scream through. Little other cool note: the Doylestown band collabed with Lansdale’s Round Guys Brewery to make a Froggy Branded Pink Lemonade Soda. And it is pretty tasty for those wondering. 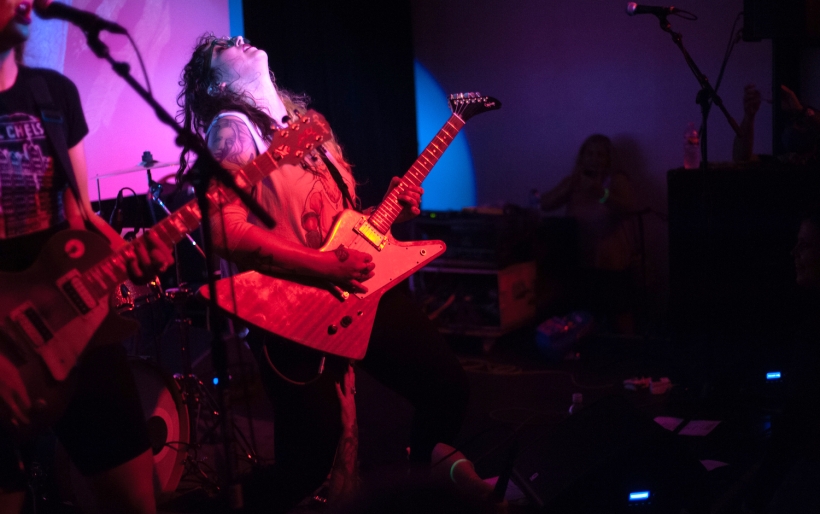 Vixen77 | photo by Will Kirkpatrick for WXPN

Vixen77 kept the punk rock Pontiac driving: lead singer Samantha Joan headed the charge and led the crowd in a very very sweaty and hot set. Their sound is something between punk and heavier rock with guitarists Caitlin D’Agostino and Elizabeth Cartwright pushing it to the limits. Cartwright, whose guitar skills were showcased very prominently, challenged the idea of what a guitar hero is “supposed to look like.” At one point the room reached a boiling point and Vixen77 had to enlist a new member of their punk platoon, a fan with a fan graciously fanning them as the rest of the fans watched the band continue down the road. 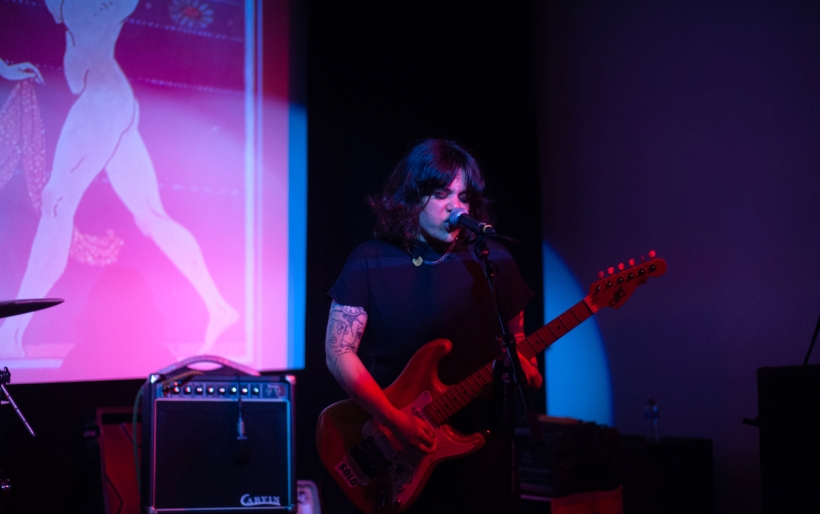 Marissa Paternoster | photo by Will Kirkpatrick for WXPN

After a solid hour of moving and grooving Marissa Paternoster brought down the pace in the best way possible, as surprising as that seems for the Screaming Females frontperson. Her trio is composed of Paternoster on guitar, Angie Boylan on drums, and Shanna Polley on keys. There’s no bassist in this band,  but its absence did not leave the sound empty, as the mix of Paternoster’s wall of guitar and Polley’s synth work filled in any gaps. This this was easily a highlight of their set: Paternoster’s ability to use her pedals as another instrument to create very intentional feedback and noise throughout her set, shoegaze style. 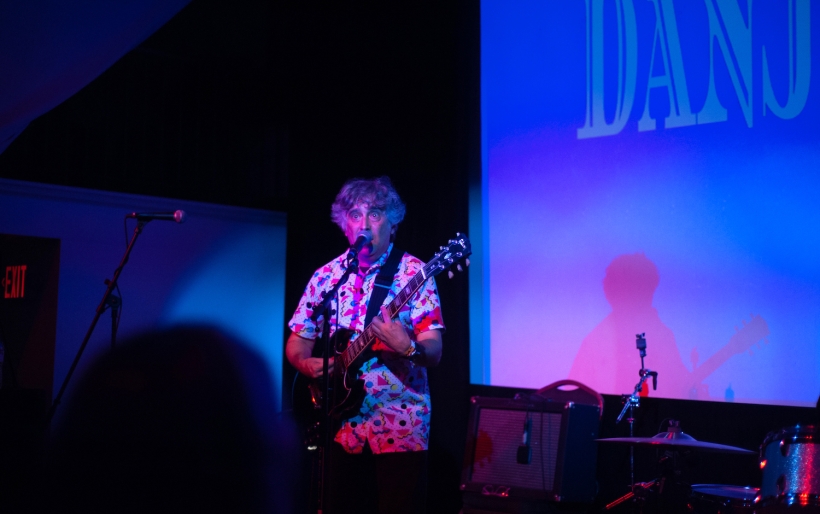 DanJoMar | photo by Will Kirkpatrick for WXPN

Closing out the night, DanJoMar is a slightly slower but still delightfully angsty take on the Dead Milkmen / Joe Jack Talcum sound. They played a variety of tracks, plus a few covers, one highlight was the cover of a Daniel Johnston song that I unfortunately did not get the name of. But the question on everyone’s mind in the room was when will we be taking a walk to Zipperhead or will we be denied our hot tea? Sadly we did not find the destined “Punk Rock Girl,” but not pleasing the crowd is pretty punk. But the Milkmen deep cut “Watching Scotty Die” helped to fill the void and has turned into a new favorite.