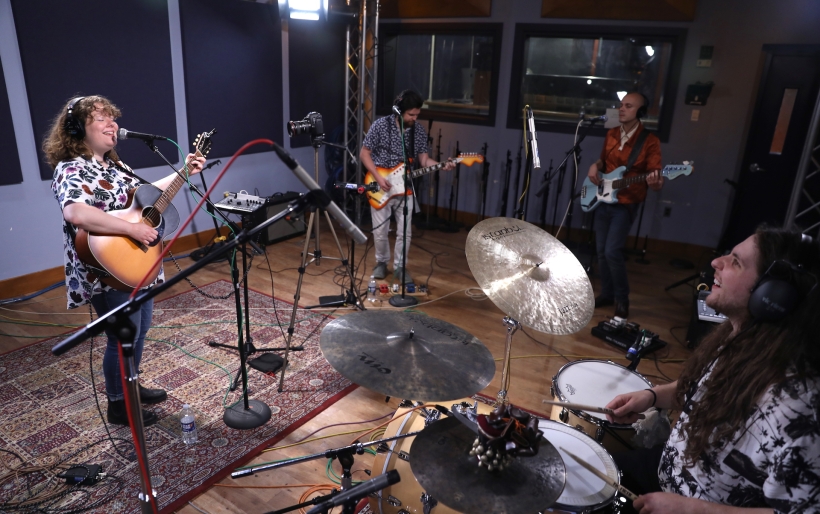 The Philadelphia folk singer returned to the scene this year with her first new music in a decade, and she played it live at WXPN ahead of a City Winery Philly show.

Brittany Ann Tranbaugh is a long-running singer-songwriter in the Philadelphia folk community. She’s been making music since she was a teenager, but the new project she put out earlier this year, Quarter-Life Crisis Haircut, is her first in almost a decade. It’s warm and wonderful, lyrically very witty and melodically very catchy. But it’s also quite intimate and honest, an open journey of love and friendship, loss and forgiveness, childhood heartache and queer self discovery. Tranbaugh’s influences stretch anywhere from The Indigo Girls to Dr. Dog to Waxahatchee to Big Thief, and her arrival back on the scene is most welcome indeed.

After the release of Quarter-Life Crisis Haircut earlier this year, Tranbaugh hit the regional music scene with her band, which joins her in the studio for this week’s Key Studio Session. On drums is Adam Shumski, on bass is Joe Plowman, with Kevin Brosky on lead guitar and everyone contributing vocals. The band shines in these performances — which feature Quarter-Life Crisis Haircut‘s title track and its single “Kiss You,” along with two unreleased songs — the back-catalog pull “Moving On,” which dates back to 2013, and the new and unreleased closer “Almost Ready,” an earnest burner built around a sparkling guitar lead from Brosky.

An additional treat with this performance: we caught Brittany and the band not long after they performed at World Cafe Live for the Philly Sings Philly hometown covers showcase. Tranbaugh has terrific taste in covers, from Katy Kirby to Sylvan Esso, and has lent her voice to versions of songs by her Philly peers and heroes from Chris Kasper to Dr. Dog. For that Philly Sings Philly show, she and the band cooked up a spot-on rendition of Todd Rundgren’s classic “I Saw The Light,” and they were so excited about it that they brought it to the studio session.

The new EP has been out since April, but Tranbaugh is not slowing down on the live scene, and has a packed itinerary of 2022 concerts — some full band, some solo — including a show this Sunday, July 17th at The Loft of City Winery Philadelphia. Rachel Sumner & Traveling Light and Sharell Bryant join her on the bill, and more information can be found at WXPN’s Concerts and Events page. To hear more of Tranbaugh’s music and to pick up a download of Quarter-Life Crisis Haircut, head to her Bandcamp page.