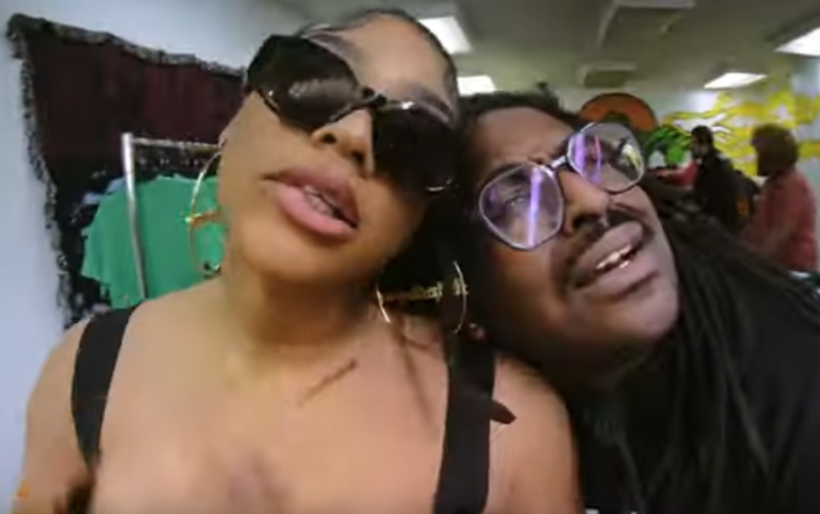 The Philly band is joined by MC Mother Maryrose on the new video from their terrific Diaspora Problems album.

“Elites don’t fight fair, I got no time to care,” says Soul Glo‘s Pierce Jordan on “Driponomics,” a raging but remarkably catchy nexus of bass-booming rap and eviscerating punk dissonance on their 2022 album Diaspora Problems.

It’s one of those tightly incisive observations of which there are scores, not just per Soul Glo album, but per Soul Glo song; we’ve said it so much in the past, but Jordan crams a staggering amount of lyrical information in each track, enough that it’s reductive to say “this song is about this thing”…because it’s probably also about a dozen other interconnected but no less important things.

On “Driponomics,” our surface takeaway during the album rollout this spring was wealth inequality and toxic capitalism; as we see in the new music video, it’s a much more specific case study of fashion brands, streetwear stores, and the upselling of merchandise — or, as Jordan put it more directly in The Fader this week, it’s about the challenges of “getting fly and staying fly.”

A super fun and frenetic music video illustrates this with Soul Glo and friends — including Miami-bound Philly rapper Mother Maryrose — storming a Center City store and leaving with armfuls of certainly marked up merchandise after dosing the white folks in the store with chloroform, including (hysterically) their drummer.

In The Fader‘s debut of the video, Jordan says “Regardless of how you get yourr money, we are promoting self employment and keeping your profits as much your own as possible. … The rich get rich by diversifying their incomes and making sure as little of it is taxed as possible. Move accordingly!”

It’s the second brilliantly satirical but also quite serious video the band has released this month. At the top of July, Soul Glo responded in part to exhausting Bad Brains comparisons with the “Gold Chain Punk (whogonbeatmyass?)” video, which you can watch below. The band’s U.S. tour runs through August, and then they hit Europe in September; their next Philly show is November 20th at The First Unitarian Church, and more information can be found at XPN’s Concerts and Events page.