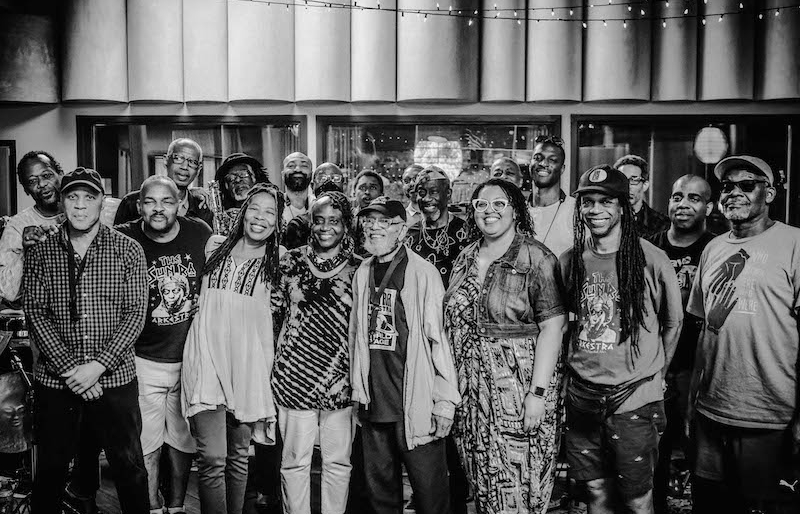 The next best thing to living in the time of sonic visionary Sun Ra is living in the time of his acolytes: Sun Ra Arkestra, the 20-person strong ensemble helmed by 98-year-old saxophonist and composer Marshall Allen. That goes doubly so if you’re a Philadelphian; it’s not uncommon for the Arkestra to show up at shows for tasteful folks who come through town — they’ve backed Yo La Tengo and more recently opened for Kurt Vile — or for them to play a bevy of their own shows, like a stellar summer 2021 gig at Woodlands Cemetery in West Philly.

Truly we are blessed with Arkestra access here in Philly, and hearing news of their next album — a follow-up to 2020’s Grammy-nominated Swirling LP — is exciting indeed. In spring of 2021, Allen and the Sun Ra Arkestra decamped at Rittenhouse Soundworks for a day of music making, and the result is Living Sky, out October 7th on Omni Sound. The seven-song album features four originals, two re-imagined songs from the Sun Ra back-catalog, and what is sure to be a lovely closer, a rendition of “When You Wish Upon A Star.”

Most of that, we’ll have to wait till the fall to hear, but the swelling and sublime “Somebody Else’s Idea” is out as a lead single (if a six-minute experimental jazz song can be described as a “single”), reworking a song that originally appeared on Sun Ra’s 1970 album My Brother The Wind Vol. 2. It’s solemn and cinematic march that bursts with big band energy and cinematic grandeur. In a press release, baritone saxophonist Knoel Scott says:

“‘Somebody Else’s Idea’ is an affirmation that the world I live in is a world that I can change. The first part of change is not accepting the status, the so called status quo, in rejecting the status quo, I free myself to the possibilities which range amongst the infinite. It is our desire. There are those who listen to our music also embrace the possibilities which range beyond the limits of the impossible.”

Listen below, and pre-order Living Skyhere.