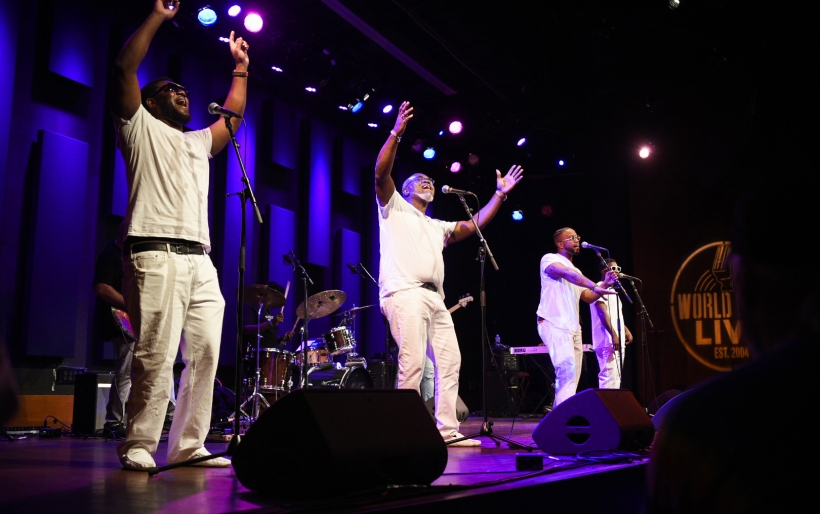 Dedicated Men of Zion | photo by Paige Walter for WXPN

It was a family affair when the close-knit harmonies and rock and roll energy of this North Carolina gospel ensemble took the Free at Noon stage today.

“This has been one refreshing morning,” said Anthony “Ant” Daniels to World Cafe Live towards the end of The Dedicated Men of Zion‘s Free at Noon performance. “I feel alright now, we drove all night to be here. It has been fantastic, I tell ya, one of the best days ever.”

It’s tough to imagine anyone in the audience at the Greenville, North Carolina gospel rock ensemble would disagree. The band showcased its 2022 album The Devil Don’t Like It today, along with its 2020 debut Can’t Turn Me Around, and the beat rarely dipped below a sprint, with classic R&B boogies mixing with close-knit harmonies on the opening “I’m Going Home,” driving into some gnarly funky blues on the title track of their latest album, and channeling The Staple Singers on “I Feel Alright.”

“We’re just some own country boys, y’all’ll hear me say ya’ll every now and then,” said Daniels at the midway point of the show. “I just say ‘thank y’all,’ it’s just in my blood.” Truly this band was a family affair, with the band leader’s son-in-law Marcus Sugg and his son Antwan Daniels joining him onstage, along with vocalist Dexter Weaver, keys player Kel Nova, bassist Corey Taylor, drummer Jaheim Daniels, and guitarist Mark Richardson.

Listen to the performance in full and check out a gallery of scenes from the show.