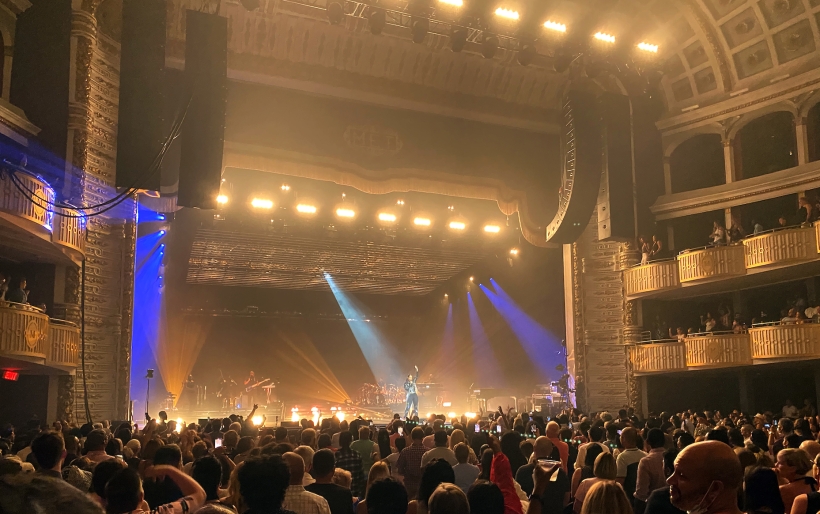 Alicia Keys and the ultimate mixtape

To say Alicia Keys‘ concert last night at The Met Philly was hotly anticipated would be a colossal understatement — even in this 90+ degree August heat.

The show was originally announced in January 2020, along with the hip-hop singer-songwriter’s seventh LP Alicia, and although the album’s collaborations with Philly heroes Jill Scott and Tierra Whack had us eagerly imagining the possibilities that an elegant night at The Met might hold, we know now that the universe had other plans. The gig was rescheduled not once but twice, ultimately touching down two years after originally planned.

But let’s take it further back: short of two appearances at the Democratic National Convention in 2016, Keys had not played Philadelphia proper in 14 years. Her runs in support of The Element of Freedom and Girl On Fire orbited the region with Atlantic City appearances, but her last concert within city limits was an April, 2008 show at the Liacouris Center on the As I Am tour; to put it in in political terms, this was three presidential administrations ago.

Last night’s 30-song, two-hour epic performance with surprise guests and crowd interaction in an intimate (for a superstar) space more than made up for the wait; not only did Philly fans finally get to take in the fruits of the Aliciaissance — aka her incredible run of albums beginning with 2016’s Here, followed by the aforementioned Alicia and then 2021’s followup Keys — but her status as a legacy artist was cemented with a truly career-spanning set. 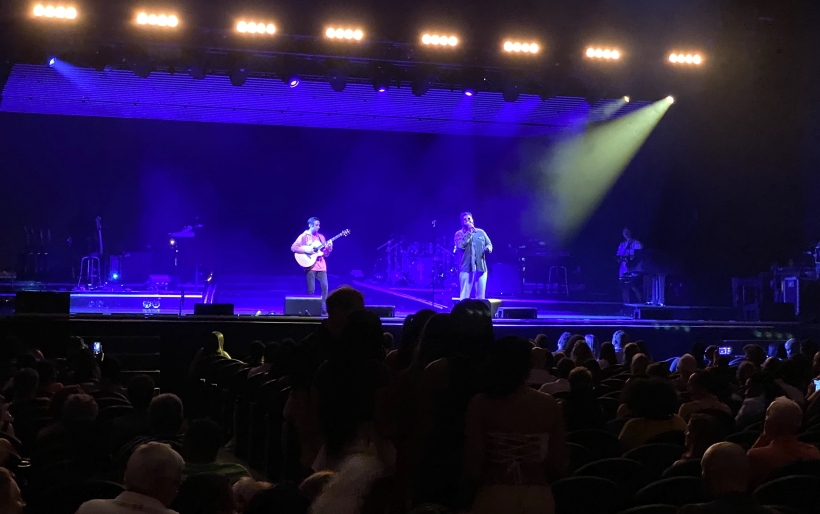 Pink Sweat$ at The Met

Philly-rooted, Cali-based crooner Pink Sweat$ warmed up the theater as the crowd filed in with a short and sweet set that was one half beat-oriented bops backed by dancers, and the other half acoustic contemplations. He positioned “Paradise” as a love song between audience members. “I’m singing for him, to her,” he said, picking out a couple up front. “So bro, don’t try to fight me after the show, it’s not like that. You can look into her eyes while I’m singing and see right into her soul.”

Sweat$ is a very Musiq-esque spirit, a hopeful and boundless romantic, and he got the whole room singing along on “Honesty,” backed only by the breezy strums of guitarist Russ. But he’s just as apt to celebrate love as give voice to struggles, and acknowledging that Philly can often be a tough city to grow up in, he closed his set on a powerful “Pink City,” singing “When you’re cold and all alone, you can build you a city and call it home. / And when I was lost and on my own, I got out of the city and made my own.” 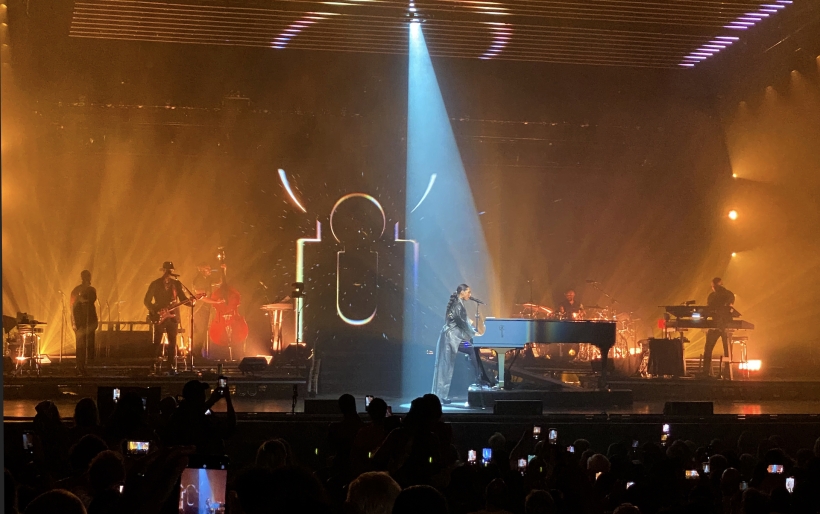 At the beginning of her set, Keys reiterated her social media remarks about how a major inspiration for the show was the late great Prince, and that vision manifested in two ways. First, by taking a production that could have been in an arena and setting it in a theater, a much more powerful energy filled the room; the proximity and the excitement electrified The Met last night. It also was apparent in the fierce musicality of Keys — who played no fewer than two pianos (one grand, one upright) one synthesizer (a dripped-in-effects Moog) and an MPC sampler — as well as the hard-hitting band which, while not massive in numbers, played with robust finesse. Philly’s Curt Chambers shredded on guitar, bassist Derrick “Swol” Ray on bass mixed with drummer Mike Reid to anchor the rhythm section, Justin C. Gilbert soared on keys, and Whitney Keaton warmly complimented Keys on backing vocals.

Once this ensemble started, they barely stopped to catch their breath: the cinematic jazz vocal aesthetic of “Nat King Cole” slid right into “You Don’t Know My Name” from The Diary of Alicia Keys, which linked via reggae vibes to “Wasted Energy” from Alicia, and then segued into that album’s four-on-the-floor club banger “Time Machine.” This was Alicia Keys, continuous megamix style, and as the Timbaland-adjacent vibes of “Karma” brought us back to Diary once again, and then “New Day” from Girl On Fire had the party people on their feet, it felt like the momentum was not going to let up.

“Tonight’s about singing at the top of our lungs after being disconnected for so long,” Keys said, and we heard that from stage and crowd alike on “Un-Thinkable (I’m Ready)” from The Element of Freedom. Voices raised even higher when Keys launched into her first-ever performance of Alicia‘s “Me x 7” and the song’s featured vocalist, Tierra Whack, appeared in the spotlight and rushed downstage, mic in hand, spitting her verse and working the crowd; she also did her own “Hungry Hippo” from Whack World, and headliner and guest exchanged an ecstatic embrace. 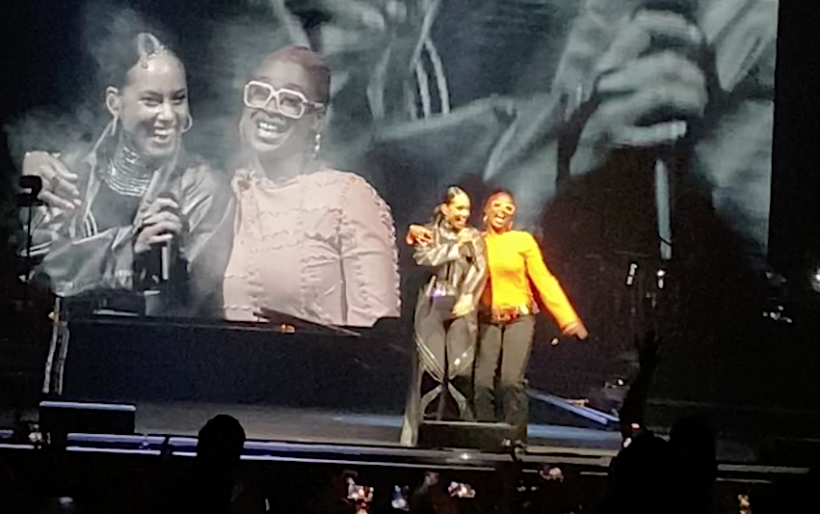 This marked the shift in the show to a more free-flowing and surprise-laden section, and as the band vamped to an interlude of Michael Jackson’s “Off The Wall,” Keys reappeared on a mobile riser with a sampler in front, a Moog in back, and the upright piano to her left; “It’s me and my favorite keys all around me,” she said into a microphone that arced inward. Her new song “Plentiful,” which samples Beanie Sigel’s 2000 single “The Truth,” morphed into its source material when the Broad Street Bully took the stage and barred down for an exhilarated audience; not ready to let up just yet, Keys welcomed his State Property bandmate Peedi Crakk in the mix as well for an impromptu “One For Peedi Crakk.”

Shifting the focus back to her own material, Keys flipped between sampler and upright to highlight three more songs from Keys, offering their original piano-centered versions and the “unlocked” synthy re-vamps, letting the audience decide for their faves via applause; “Skydive” was more popular as a clubby bop than a somber ballad, “Is It Insane” was warmly embraced for its smoky jazz original moreso than its murky cloud rap remake, and “Only You” as a house jam would not be denied. “It’s good for me either way, since they’re both my songs,” Keys said cheekily, conducting the proceedings like a DJ making the ultimate mixtape. 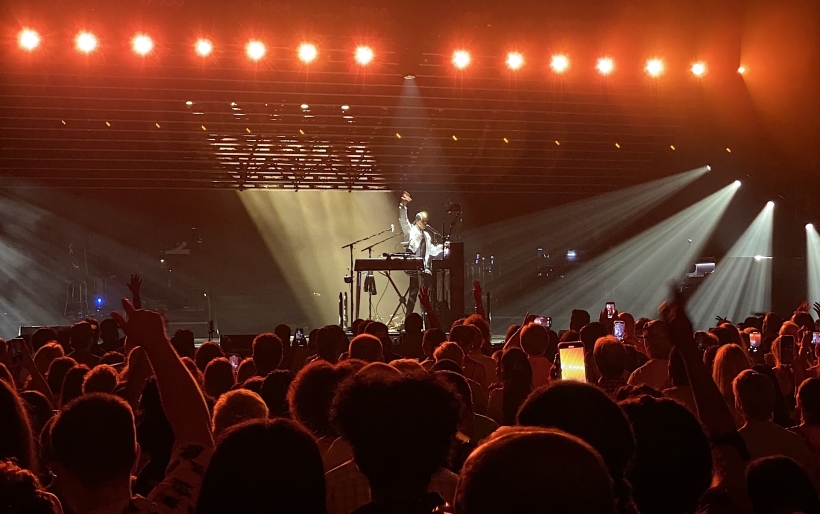 A trifecta of songs about her hometown of New York and a stroll through the audience to a playback of her Jay Z collab “Empire State Of Mind” brought us back to a full-band orientation, and Keys slayed her first big hit “Fallin’,” shared some more Philly love by spinning the Black Coffee remix of “In Common” into a cover of Crystal Waters classic “Gypsy Woman (She’s Homeless),” and ended the main set with the stratospheric vocals of “No One” from As I Am. How did she have this much endurance? It was remarkable, and the crowd was right there with her, through another band interlude (Chambers smoking the “Purple Rain” solo this time) and a two-song encore, ending with Keys and thousands of voices ringing from The Met’s rafters on the show-stopping “If I Ain’t Got You.”

In the days of “Fallin’,” it seemed everyone knew and loved Alicia Keys. For some folks in attendance last night, she was a throwback, an old favorite who they fell in love with on Songs In A Minor and Diary and who they maybe haven’t kept up with as closely as they would like; for others, they were reintroduced to her through that recent and prolific run of releases, and were excited to see her burning a new creative flame. For others still, they were with her every single step of the way. Last night, The Alicia + Keys Tour exceeded the expectations of all those corners of fandom, and collectively reminded us that, while she could maybe come around Philly more often, her superstar status is unimpeachable.