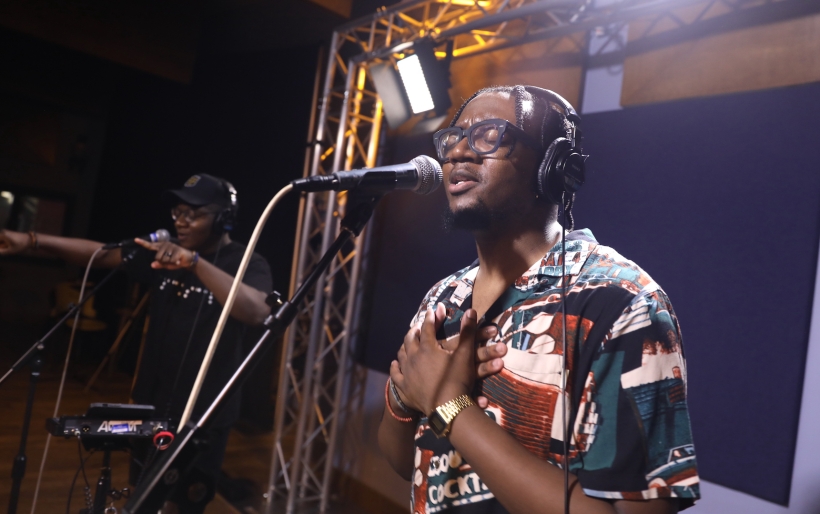 When we last connected with Philly hip-hop singer-songwriter Balmour, his new project Double Hp was fresh on the digital shelves. Its personal stories of love, loss, trauma and healing resonated strongly thanks to the dreamlike beats and sonic textures guiding it from one track to the next, as well as a video game concept tying it all together. But the most surprising part of the project: as cohesive as it is, Double Hp wasn’t the work of a single producer, or even direct collaborations with multiple producers — Balmour crafted the album’s sound by beat-shopping on YouTube. It’s a testament to the specific sound and vision he had in mind; he knew exactly what he wanted, so he went out and found it.

Now we enter the next phase: playing Double Hp live, and it’s another departure. Where singing and rapping to backing tracks might have been the gold standard approach, Balmour enlisted close friends from the open mic circuit to bring the album to life in WXPN studios: keyboard player Dan Saleem, bassist Justin Cropper, and drummer Cam Cephas (all of The Funkitorium) as well as his brother Dan Goode on vocal accompaniment. While the skilled players inject a vibrant pulse and high energy to these four album highlights — dig the fervent soul of “Align,” or the simmering gospel arrangements on “What I Need” (which, save for a few lyrics, could be about God as easily as a romantic partner) — the mood they strike is grounded but light, allowing Balmour and Goode to ascend into zones of rapt contemplation, returning at the finale of each song to offer commentary, or just marvel at the atmosphere.

Watch videos of Balmour’s Key Studio Session and check out photos from the performance below; to catch the vibe in person, see him at Joey Stix’s next Super Friends party on August 27th.