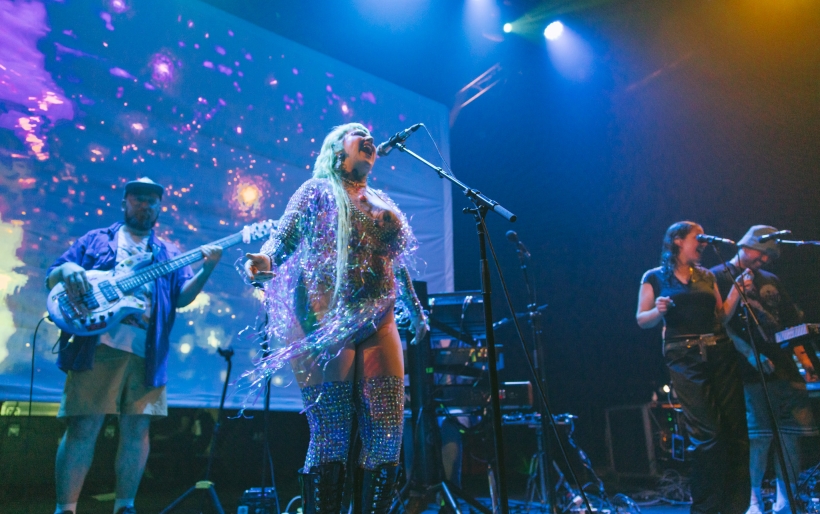 The eclectic pop band grooved and energized a sold out Philly crowd.

The hugely popular Australian band Hiatus Kaiyote made their return to Philadelphia this past Sunday, August 7th, in front of a sold out crowd at the amazing venue, Union Transfer. The band — known for their funky mixture of jazz, R&B, and even hip-hop — were greeted by raucous cheers and whistles as they one by one took the stage…and of course the loudest cheers were saved for lead singer and tour de force performer Nai Palm.

From the start of the opening “Rose Water,” the energy in the venue was amazing. Hiatus Kaiyote flirt with jam band vibes, or at least that’s how the audience feels, swaying and bobbing to each new tune. It really feels like the band feeds off the energy of the crowd. Nai Palm repeatedly expressed how much better the crowd was then their last performance at a festival. Hiatus Kaiyote ran through hits from their first t albums, songs like “Nakamarra,” “Breathing Underwater” and “Slip into Something Soft.” But you could feel the energy in the place lift as they went into “Building A Ladder,” when the audience sang their hearts out even at times feeling like they were finishing the lyrics for the band.

The crowd went wild at one point when Nai Palm mentioned a love for Bowie, predictable especially with his ties to the city, and as the lights switched and bathed the band in purple she mentioned Labyrinth and broke into a cover of “Within You” from the soundtrack. The highlight of the evening for me was when they played “Red Room”; the feeling in the venue was soft and loving as Nai Palm seductively sang. I really have to say I was completely immersed in the energy and vibe of the whole situation between the band and their fans. It was my first time seeing them live and it won’t be my last for sure. I’ll be there next time they come to the city, you should be too!

Below, check out a gallery of photos from the show. Hiatus Kaiyote’s tour continues tomorrow night at The Filmore in Silver Spring, MD.