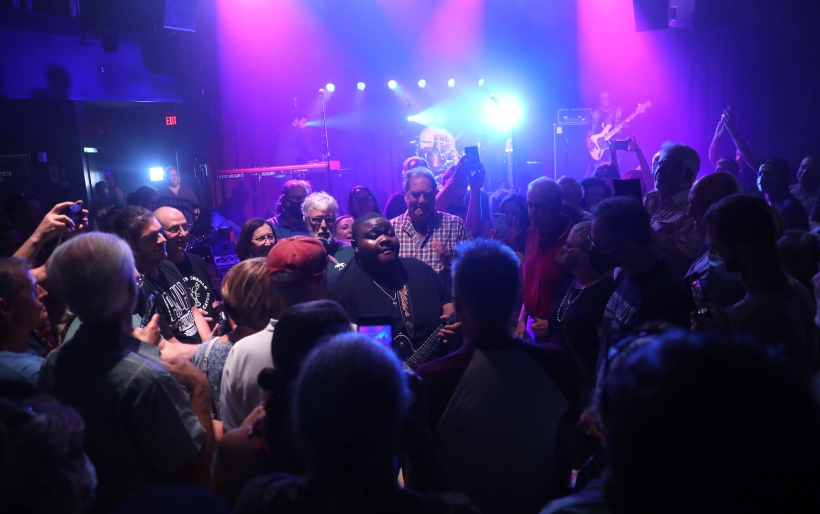 The Mississippi bluesman and XPN favorite played a midday concert in advance of gigs in Reading and Jim Thorpe.

Live from Ardmore Music Hall, Grammy Award winning guitar master Christone “Kingfish” Ingram does not need to prove his worth as a blues musician, but he plays like his life depends upon it. In the only 23 years he has been on Earth he has achieved what many only have dreamed of, and with only two studio records under his belt his career, has only just begun.

Stylistically it is easy to put Kingfish into the blues guitar category, but he has transcended ripping through blues scales and sounding like some sort of John Mayer-Stevie Ray Vaughan hybrid. While you can see his influences shine through, he has been able to find his own voice on the guitar.

Same goes with his song writing, the song “Another Life Goes By” follows a traditional 12-bar blues progression, but the way he has molded the sound and vibe into his own sets him apart in the over-saturated blues market. The album cut of “Another Life Goes By” has a hip hop influence at least in the drum part. But on stage today he explored more cool jazz sounds. His keyboard player, Deshawn Alexander started the song with some “Riders on the Storm” Ray Manzarek like playing. And Kingfish himself ran through some wild licks along with (a favorite of mine) some Wes Montgomery like octave lines.

Even with Kingfish remarking how he isn’t a morning person and he may mess up some notes, he still played an amazing show and it makes you wonder what he plays like when in peak performance conditions. A lengthy jam on “Too Young To Remember” once again found Kingfish and his wireless guitar jamming in the thick of the crowd, to the delight of the packed house.

“Long Distance Woman” pushed the band sonically into the psychedelic and jazz fusion world with Robert again came in with some wild synth sounds which caused Kingfish to remark during the song about how sometimes when he does this he sometimes doesn’t pay attention. Plus bassist Paul Rogers thumped along creating the songs heart beat in the literal and metaphoric sense.

Kingfish heads to Reading, PA to play tonight at Santander Performing Arts Center. Then on August 19 he returns to PA for a show in Jim Thrope at Penn’s Peak. Check out both the audio stream of the show below and XPNs Concert Calendar for more information on his upcoming shows.