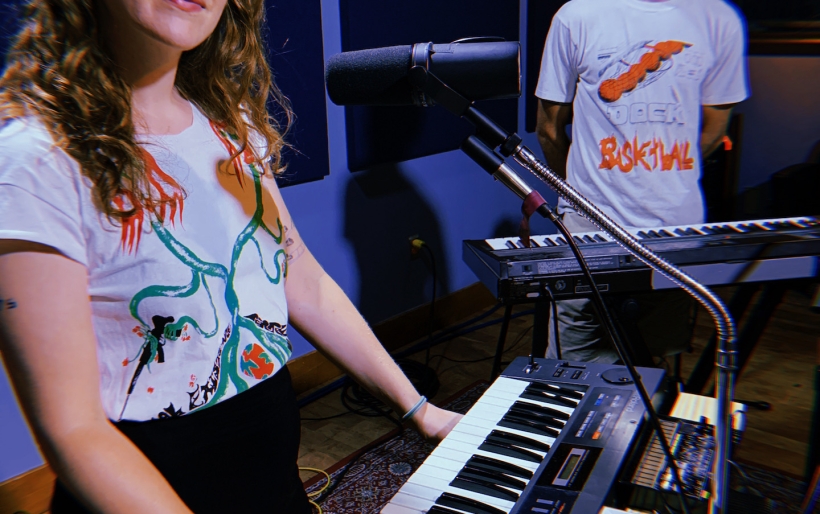 Palberta’s Nina Ryser performs songs from her latest solo album and previews new material in her second studio visit of the year.

Joining us in the studio for this Indie Rock Hit Parade live session is an artist who’s become a friend of the program in near-record time. It all started on the day I recorded our session with Cola. That night, the band headlined a show at Kung Fu Necktie, and I was playing records between sets. The first of those sets was a captivating solo performance by West Philadelphia-based musician Nina Ryser. After a seamless run of experimental electronica, Ryser mentioned that she, like most gigging musicians, had records from her various projects for sale at the back of the room. This included the latest from a group that’s quite familiar to Indie Rock Hit Parade listeners: Ryser is, of course, a member of the Bard College-rooted art-rock trio Palberta. Their minimalist and occasionally inscrutable take on indie rock has made Palberta critical favorites for almost a decade. After her set, Ryser informed me that another band she’s in was scheduled to record a session at XPN in the coming week. That turned out to be the ensemble that supported Kristine Leschperat her recent visit to our studio.

Like her set at Kung Fu Necktie, Ryser’s set draws heavily from Paths of Color, her 2020 solo album. The meditative “Know Me Like You Do” segues into the anxious “Shelf the Trophy,” with the lockdown-era lament “Breathe Again” offering an emotional gut-punch. For this session, Ryser is joined by her frequent collaborator, Gabe Abels, whose synth contributions alternately pierce and billow. The session concludes with a new song, “You Are What You Eat.” The timing of this session’s airing has a celebratory angle; Ryser and Abels got married this past weekend. It also comes ahead of her next Philly concert this Tuesday, August 23rd, opening for Golden Apples at Liberty Point (more information at our concert calendar).

Listen to Nina Ryser’s Indie Rock Hit Parade session below, and check out some of Paige Walter’s photos from the studio.